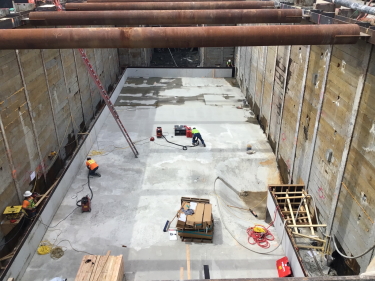 Photos from SPU [enlarge]
Crews are building a diversion structure in East Ballard that will eventually connect to the storage tunnel. 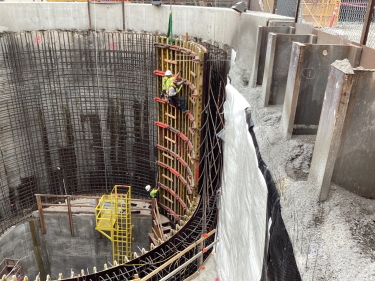 [enlarge]
Construction is well underway in Wallingford on the shaft where MudHoney will be extracted.

The tunnel boring machine named MudHoney has passed under the Ballard Bridge, a critical route milestone, according to Seattle Public Utilities.

MudHoney is building the $570 million Ballard-to-Wallingford underground storage tunnel that will reduce polluted stormwater and sewage that flow into the Lake Washington Ship Canal, Salmon Bay and Lake Union. SPU and King County Wastewater Treatment Division are leading the project.

MudHoney at the end of June had tunneled 3,790 feet of the 13,946-foot-long tunnel, according to the project's website. It passed below the Ballard Bridge last week.

SPU says critical route milestones fall within enhanced mining zones, which are spans along the tunneling route with important structures in the middle. The enhanced mining zone under the Ballard Bridge was 300 feet long, with the center of the bridge at about the 150-foot mark. For the Ballard Bridge, crews tunneled through the area around the clock so that MudHoney didn't have to pause under the bridge.

Getting to the Ballard Bridge milestone wasn't all smooth going — MudHoney in May had to take on a 10-foot boulder that was in its path. Crews paused the 18-foot-diameter TBM after encountering the massive rock, and then replaced and repaired some of the cutterhead tools to better equip it to take on the boulder. The machine later that month broke through the boulder and resumed at its original pace.

The DJC reported in March that the tunneling project is using a boulder detection system developed by the Colorado School of Mines.

“The boulder detection system from the Colorado School of Mines measures vibrations that indicate where there might be a boulder in the path of our contractor's tunnel boring machine,” Keith Ward, SPU's project executive, told the DJC in March. “When boulders are expected, MudHoney's tunnel boring machine operators will usually slow down the rotation of the cutterhead and increase the forward thrust of the machine to allow cutting discs on the front of the machine to break boulders into smaller pieces that can pass through the machine.”

The next critical route milestone will be at East Ballard, where crews are building a diversion structure on 11th Avenue Northwest that will eventually connect to the storage tunnel. MudHoney should arrive there later this month for some planned maintenance.

SPU expects MudHoney next March to reach Wallingford, the terminus of tunneling. The TBM started digging last summer from Ballard.

The 2.7-mile tunnel along the Lake Washington Ship Canal will temporarily store up to 29.6 million gallons of combined sewer overflows during heavy storms that would otherwise make their way into local waters through seven outfalls. Those CSOs will be stored until they can be processed at the West Point Treatment Plant.

Lane Construction Co. is building the main tunnel and Jacobs is the construction management consultant. The rest of the team includes McMillen Jacobs Associates (no affiliation) of Seattle as design engineer for the storage tunnel and a pump station. Kennedy Jenks is the designer of a smaller conveyance pipeline in Ballard that is part of the overall project. Northwest Boring Co. is building the smaller tunnel as a subcontractor to Lane.