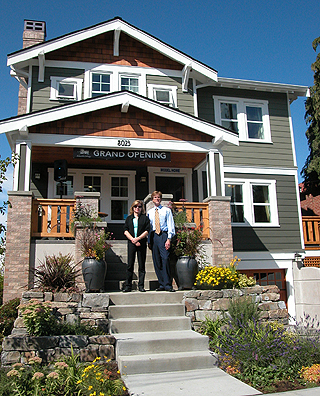 Photo by Katie Zemtseff [enlarge]
Features such as formaldehyde-free doors and millwork cost an extra $4,000 per house. But developers Fawn Johnson and Curt Pryde are confident Seattle buyers who appreciate the quality and health benefits will pay for the ultimate in green.

When some neighbors in the Green Lake area found out a six-home lot would house 20 new cottages, they were not happy. So as Pryde + Johnson's Ashworth Cottages has progressed, principal Curt Pryde said the greatest reward has been hearing neighbors say, “You know, you've done a nice job.”

The cottages are designed to blend with the neighborhood, and do it in the greenest way possible. Ashworth Cottages is the first residential project in Washington and the seventh in the nation to achieve the U.S. Green Building Council's highest certification of LEED platinum.

Fawn Johnson, principal at Pryde + Johnson, said going for platinum required thinking about everything that went into the project. “We made the commitment that we were going to be consistent in all of our decisions,” she said. “(We can) say we followed it all the way through.”

Formaldehyde-free doors and millwork cost an extra $4,000 per house. But both Pryde and Johnson are confident Seattle buyers who appreciate the quality and health benefits will be ready to put down between $739,000 and $950,000 for the ultimate in green.

Houses have between two and four bedrooms. Sizes range from 1,450 to 1,950 square feet.

Pryde said the price is offset by the value. Electricity, heat and water bills will be lower, and the indoor air quality will be better. They should also have a higher re-sale value. “These kind of things don't wear out. It's costing more to begin with because you're putting together a higher quality product,” he said.

“It's not about making the most money on every job. If it was, you probably wouldn't do sustainability to begin with,” Pryde said.

Features that won the project a LEED platinum designation include an on-demand hot water system that warms water at the push of a button; a heat recovery ventilation system that constantly filters air through the house, saving about $300 a year and providing 100 percent air exchange; and siting the houses on an infill spot that minimizes reliance on cars and encourages transit, walking and biking.

The cottages also use recycled and local products. Back porches are made of Trex, a material composed of recycled plastic grocery bags, reclaimed pallet wrap and waste wood; materials like bricks, terra cotta tiles and truss timbers were salvaged from the site and re-used, and there are at least 12 local products in each house.

At a press conference on the site yesterday, Mayor Greg Nickels said projects like Ashworth Cottages are integral to managing Seattle's growth as it adds another 1.6 million people by 2040. The only way to accommodate that many people, he said, will be to design in a smart way.

“This is an example of smart development,” he said. “While it is different from the neighborhood around it, it fits in.”

Energy savings from Ashworth Cottages is estimated at 85,000 kilowatt hours per year. They should also save 51 metric tons of carbon emissions, or the equivalent of removing 34 vehicles from the road every year, according to the city of Seattle.

Diane Sugimura, Seattle's director for planning and development, said, “This is what we hope all developers and designers will do from now on.”

But putting 20 homes on a lot zoned for six was not easy. To get the area rezoned, Pryde + Johnson had to wait six months and get the project approved by the Seattle City Council.

Scott Kemp, a senior land use planner with the city, said, “It's very, very hard to do because the way the rezone (ordinances) are written, they really lean towards keeping a neighborhood single-family.”

“There was a lot of resistance to this. I think this is successful now because it looks like single-family from the outside,” Kemp said.