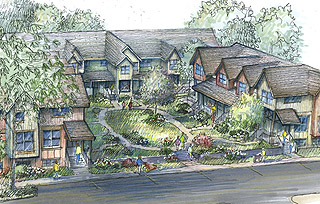 Rendering courtesy of Weber+Thompson [enlarge]
Sweetwater in Idaho is aimed at people who work in Sun Valley but have to commute long distances to find affordable housing. It is one of the pilot projects for LEED’s new Neighborhood Development program.

Benotto is an architect and landscape architect who heads the green resource group and the planning division at Weber+Thompson. She is managing two projects in the region that are trying to meet the new neighborhood-level green design standards.

Lifestyle change is the future of green design, Benotto said. Creating compact, efficient, pedestrian-friendly communities on in-fill spaces will reduce driving and environmental impacts, and create a stronger sense of community. For many people, that means a higher quality of life, Benotto said.

“One of the myths of green design is we have to suffer to get it,” Benotto said. “Green design is really just smart design. It's making the most efficient building possible on the site.”

One thing designers and developers need to start thinking about, Benotto said, is making multi-family housing work for families. Compact, urban living doesn't usually attract people with children but it could if it were better designed, she said. Proximity to schools, safer environments and more amenities all appeal to families, and with efficient land planning, multi-family housing can feel more like single-family living, she said.

Benotto is project manager on Sweetwater, a 22-acre in-fill development in Hailey, Idaho, that is targeting certification as one of the first Leadership in Energy and Environmental Design's Neighborhood Development projects.

The new pilot rating system is a joint project of the U.S. Green Building Council, the Congress for the New Urbanism and the Natural Resources Defense Council. It has nine requirements including smart location, wetland and water body conservation, compact development and floodplain avoidance. After that, points are given for different green building and planning components, like bicycle networks, reduced parking, proximity to work, stormwater management and reducing the heat-island effect.

“In total, all of these changes make a huge difference,” Benotto said. “We are looking to create a lasting and stronger community that people just love to live in.”

Sweetwater targets people who work in the resort community of Sun Valley but have to commute long distances to find affordable housing. The $115 million complex will have 86 buildings with 421 units ranging from 630 to 1,900 square feet. There will be a mix of condos, townhouses, single-family attached homes, cottages and live-work units built in four phases. Construction started in 2006 and each phase is expected to take a year.

Most parking is underground, with foot and bike trails throughout the neighborhood. It will have bus shelters and connect to a nearby bike trail. A 5,200-square-foot community clubhouse, three acres of open space and garden courtyards are intended to help create a sense of community.

Kevin Adams, CEO of Sweetwater developer Locally Global Investments, said Benotto was able to take the green components further than he had originally planned. He said she convinced him to centralize a large park space and was able to get more cars off the street and build more densely than first envisioned.

“A lot of people have ideas but there are very few who can actually execute upon them,” Adams said. “Her ability to just articulate all of that, tie it all together, was very poetic and very convincing to that community.”

Benotto is working on a second LEED-ND pilot project in Bellingham, still in design review, called Meadow Ridge Park. Plans are to build 91 buildings on a 42-acre in-fill site, with 369 residential units and 10,000 square feet of commercial space. The development has a goal to have no impact on the existing water pattern, Benotto said. Buildings will be set on pin piles and roads will be made with porous concrete, with the area underneath used for infiltration. The Philbin Group is landscape architect on Meadow Ridge Park.

Green design has been Benotto's passion since the mid-70s, decades before LEED became a familiar term.

The Canadian-born Benotto started her studies as a biology major, planning to go into medicine. But then she fell in love with architecture for its creativity and because the architectural students she met seemed so happily consumed with their work.

She got her undergraduate degree in landscape architecture to combine her knowledge of biology with her love of the studio life. Working in Toronto on projects for the community health care system, she worked on indoor air quality and researched the environmental impact of designs and materials.

“It was an awareness that began right from the beginning,” Benotto said. “There are so many pluses of making the project green.”

Benotto went back to school and got a Masters of Architecture from UCLA. That allowed her to do more site and master planning rather than just “shrubbing it up,” she said.

She said she's happy with the awareness of sustainability in design today, and that more clients are asking for sustainable features in their buildings.

But there are still challenges.

“We need studies that show that the market is willing to pay more for a building that is energy efficient,” Benotto said.

Still, architects should be using many “green” principles just by nature of being good designers, she said, like making durable buildings, selecting materials with high recycled content and low emissions, and maximizing daylighting.

Architects also have a responsibility to bust the myth that green design costs more, she said. Even LEED platinum increases building costs by less than 10 percent on average, she said.

“It's about creating habitat, a really good human habitat, and making sure it will last for a long time,” Benotto said.

So far 238 projects in six countries have registered for the LEED-ND pilot program, including two Callison projects in Colorado and Utah, the 340-acre South Lake Union Urban Center neighborhood plan, the Interbay Neighborhood Master Plan and Thornton Place near Northgate. It costs $20,000 to participate in the pilot project.