Piper Village in Greenwood to be centered on a 'woonerf' 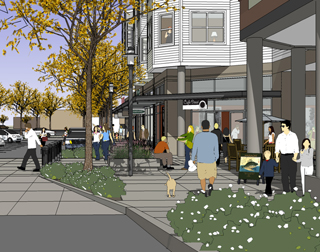 Rendering courtesy Michael Whalen [enlarge]
The first phase is now under construction and will include this “woonerf,” a street designed to slow down cars and encourage people to walk.

Gary Brunt's family has owned property near the intersection of Greenwood Avenue North and Northwest 85th Street for 100 years. Different development options have been considered for decades, and now Piper Village is finally under way.

Piper Village will be a 5.5-acre urban village, stretching from the vacant McDonald's on Greenwood to a large portion of land behind Top Ten Toys, Blockbuster and Bartell Drugs on Northwest 85th Street. It will be built in phases over 10 years.

The first phase — The Sedges at Piper Village — should open next April on a 3-acre site. The $17 million, three-story complex will have 46 apartments on the second and third floors, and 12,000 square feet of retail on the ground floor. Brunt said he will be looking for four or five local businesses for the retail. 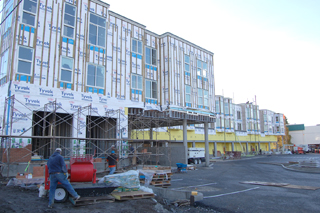 Photo by Katie Zemtseff [enlarge]
The Sedges at Piper Village should open next April. The three-story complex will have 46 apartments and 12,000 square feet of retail.

Brunt said the first plan was to build retail on the land in 1939. Those plans were drawn up by his grand aunt, Beida Morrow, but they were scrapped due to World War II.

Brunt has been involved with the property since the early 1980s, and said he has “always had visions of doing something.”

Michael Whalen is the design architect, and Sclater Partners Architects is the architect of record. Rafn Co. is the general contractor.

The first phase also includes improvements to retail buildings Greenwood owns, including Bartell's, Top Ten Toys and Blockbuster. A new lane will be added, running from First Avenue Northwest to Palatine Avenue North between The Sedges and the existing retail. The idea for the lane was suggested by neighbors. It will be a “woonerf,” a street designed to slow car travel so pedestrians can take precedence over vehicles. In a future phase, the lane will be extended to Greenwood Avenue.

The project has an environmental focus and is being constructed to meet both Built Smart and Built Green standards. Brunt said LEED accreditation was considered but did not make economic sense.

The biggest green feature is the 161-space parking lot, which is paved with pervious asphalt. Brunt said this will be the largest application of pervious asphalt in the city. He said he had no trouble getting permits for it from the city.

Other green aspects include extensive mold prevention, large windows for daylighting the living spaces, swales to treat stormwater and drought-tolerant landscaping. Brunt said the green features were included because his family has a history of being environmentally minded, and because they are “part of the times.”

Brunt said his family is a long term owner and sees green features as adding value.

“We're not going to turn around and sell it,” he said. “My plan is to develop something for future generations of the family that we can be proud of now and that they can be proud of in the future.”

Part of the site is a bog. The Sedges originally was planned to be five stories with undergound parking, but Brunt said the city required a smaller building. The structure sits on piles that range from 18 to 35 feet deep.

Phase two should break ground in 2009. In that phase, the McDonald's site on Greenwood will become two new apartment and retail buildings with about 10,000 square feet. That work should be complete three years after construction begins.