Weber says eco-lab project will need help from the city 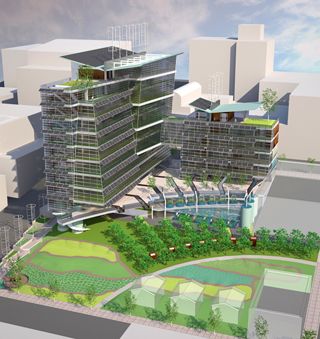 Image courtesy Weber Thompson [enlarge]
Weber Thompson’s Eco-Laboratory concept is an apartment building that produces all its water, treats all its waste and creates all its energy. It also would have a vertical farm.

Weber Thompson presented its Eco-Laboratory Project to the Seattle City Council this week. A principal of the firm said this is the first step in figuring out what codes or city ordinances would have to be changed to allow such a project to get built.

Peter Greaves of Weber Thompson said the firm is in early discussions with a developer in the Seattle area to create a living building project “inspired by” Eco-Laboratory. Greaves would not give details but said it would be located near a transit station in Seattle.

Eco-Laboratory won the top prize in the conceptual category of the Cascadia Chapter of the U.S. Green Building Council's 2008 Natural Talent Design Competition. The competition invited living building designs from designers who had been in their job less than five years. Eco-Laboratory went on to compete in the USGBC's 2008 national competition, which it also won.

A team at Weber Thompson has been refining the design and trying to figure out how to make this a viable project. “We're really trying hard to get from the academic to something commercial,” Greaves said.

The Eco-Laboratory concept is an apartment building that produces all its water, treats all its waste and creates all its energy. It also would be a model for vertical farming, producing fruits and vegetables that could be sold on site.

But Greaves said there are roadblocks towards creating such a project. One of the largest is figuring out how to incorporate farming into mixed-use. After all, he said, “NC” zoning stands for neighborhood commercial.

“It's a new idea about what constitutes the commercial component in a mixed-use building. What if it included tomatoes?” he said. “Not to be cheeky about it but I think it's probably as simple as that.”

The conceptual project was designed for the corner of Elliott Avenue and Vine Street in Belltown.

Systems in the building would be interconnected. It would produce and treat all of its own water by capturing and filtering it through a living machine. Cleaned blackwater would be reused in other areas of the building, such as in hydroponic gardens. Methane, a byproduct of the treatment system, would run a hydrogen fuel cell, which would be combined with photovoltaics and wind to create energy for the building, and possibly put energy back into the community.

“It takes the approach to urban agriculture beyond growing food in the ground,” Greaves said.

Greaves said the project focuses on existing, available technologies, rather than “pie in the sky” concepts. “Our thrust here in the office is to really make it implementable and to do something that is a living building that is beyond what we're doing right now.”

The project is also notable in that it would be a commercial development. Most living buildings that are planned or under construction are being done by foundations or as demonstration projects.

Myer Harrel of Weber Thompson said the project is designed to stimulate new thinking about development. “This building is not altruistic or philanthropic. In some ways it's meant to influence the market.”

The project has received national press coverage and inquiries from China, Brazil and Poland, among other countries. “We can show the world how it's done. People will come to Seattle just to see this,” Greaves said.

But getting such a project off the ground requires help from the city council, and other city departments. Greaves said the team would need the council's help in getting new technologies into first-use applications, in finding funds to mitigate possible commercial risk and in existing regulations.

“We will need your help in breaking down ordinances and code barriers to do this type of development,” he told the council.

There are significant code barriers in reclaiming and reusing water, and allowing the project to go off the grid.

Weber Thompson was invited by Conlin to present the project to the council.

Members of the council asked team members if this kind of project could make financial sense. Albert said based on ballpark estimates, the team is relatively certain this is an economic model that would work.

For more information on the project, visit http://www.weberthompson.com/eco-laboratory.html. To read DJC coverage of the project from the Natural Talent Design Competition, visit https://www.djc.com/news/en/11199976.