Seattle has two designs for park along Bell Street 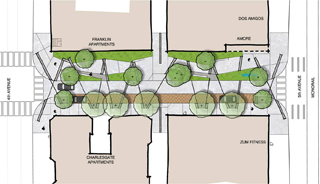 The Seattle Department of Parks and Recreation is adding park space to five blocks of Bell Street and is considering two designs for the project.

The team recently presented two designs to the Seattle Design Commission and the public. 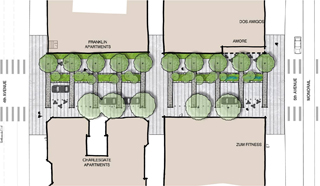 [enlarge]
The design shown at the top is called the “sluiced surface plan.” It was inspired by the earth moving that created the Denny Regrade. The lower design is called the “measured movement plan.” It reflects the rhythms of the street and the area’s history as Seattle’s film row. The final design may include elements from both.

The project will affect the area from First to Fifth avenues and create 17,000 square feet of park space. The city is converting one lane of traffic to public recreational space and reconfiguring parking to create a linear open space with landscaping, lighting and pedestrian amenities.

Nate Cormier, senior landscape architect at SvR, said the two designs are meant to represent “bookends” of the area's history. Bell Street and the area around it have changed dramatically in the past 100 years. Tons of rock and soil that originally formed a steep hill there were removed and the land was regraded.

“We also want to be responsive and worthy of that legacy of transformation,” he said.

One of the designs was inspired by the earth moving that created Bell Street. Called the “sluiced surface plan,” it is meant to represent the changed landscape. The pathway through the park meanders down the street, moving from side to side. Cormier said it reflects the fact that cities are always changing, and that some landscapes are made while others are unmade.

This design has flexibility in lighting and tree location. Existing trees could be preserved and other trees could be placed to help frame doorways and other sites. Lighting would be varied and scattered. Gathering areas would be different sizes, and there would be crossing areas at different points along the street.

The second design is called the “measured movement plan.” It was inspired by the rhythms of the street and also reflects the area's history as Seattle's film row. In this design, the park would have a pathway straight down the street.

“This one says, the people in a sense are the architects,” Cormier said. “It's more of a stage, more flexible, more taut compared to the other one that really sets up those opportunities more explicitly.”

In the measured movement plan, lighting would be at set intervals in the traditional manner of street lights. Gathering spaces would be the same size and located in similar spaces, and crosswalks would be at street ends.

Kris Snider, principal at Hewitt, said, “We want people to pass by and want to come back to the street, for it to be different.”

Two public meetings about Bell Street have been well attended, with more than 130 people at the January meeting. Cormier said people slightly preferred the sluiced plan because of its perceived flexibility. The biggest issue the public responded to, he said, was connectivity. Almost everyone preferred the flexibility of crossing the street in many places rather than just at specific crosswalks.

Design commission members suggested a number of items for the team to look at. They asked the team to consider how the project could eventually extend west of First Avenue and east of Fifth Avenue, and how intersections could be connected to the park area in a stronger way.

Mary Johnston, chair of the commission, said the project is “magnificent. We hope it's a prototype for more projects similar to that.”

The project has a $2.5 million budget from the 2008 Parks and Green Spaces Levy. The city recently applied for two grants: $200,000 from the National Endowment for the Arts to enhance public art, and $400,000 from the Environmental Protection Agency to fund sustainable water elements.

The budget has $75,000 set aside for public art. Sheila Klein has been selected as the public artist.

The team will come up with a single design and present it at a public meeting in April. Construction should occur in 2011.

Other team members include Read Wagoner for public involvement and WSP Flack & Kurtz for lighting and electrical.