$19.4M power plant in Oregon will run on waste from onions, potatoes 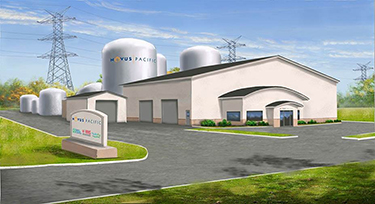 Image from Adolfson & Peterson Construction [enlarge]
The biocatalytic conversion plant will be constructed at the Port of Morrow near the Columbia River.

At the end of the movie “Back to the Future,” Emmett “Doc” Brown returns to the town of Hill Valley in his DeLorean time machine in search of garbage to power the car's Mr. Fusion nuclear reactor.

That scenario seemed a little far-fetched when the movie came out in 1985, but now Novus Pacific is planning a futuristic power plant in Oregon that will use onion and potato waste to power as many as 16,500 homes.

Novus won't be using the Mr. Fusion home energy reactor — which the movie suggested would be common by 2015. It'll use a proprietary anaerobic digester that has been field tested.

Novus is working with a joint venture of Adolfson & Peterson Construction's Energy Group and Harris Mechanical to develop the plant, which will be at the Port of Morrow in Boardman. The site is at 71419 E. Columbia Blvd.

Construction on the $19.4 million project is expected to start in late November and finish by the end of 2015.

For field testing, Novus, A&P and Harris developed a pilot-scale mobile anaerobic digester housed in a 53-foot shipping container. It was tested at the site for six months to see how the technology handled the local feedstock, which consists of waste from onion and potato processing plants, port wastewater, dairy manure, seasonal processing plant by-products and low-value straw.

The digester uses what Novus calls biocatalytic conversion. It will be able to process about 442,000 tons of by-products yearly to create 987,000 mmBTUs of biogas, 237,000 gallons of concentrated liquid organic fertilizer and 86 million gallons of clean water.

Those commodities are expected to generate $9.7 million in yearly revenues.

A&P and Harris led feasibility studies for the project and helped Novus evaluate sites. A&P also worked with the port on permitting and logistics, and provided preconstruction services.

A&P's Energy Group is developing several other anaerobic digesters across the country.