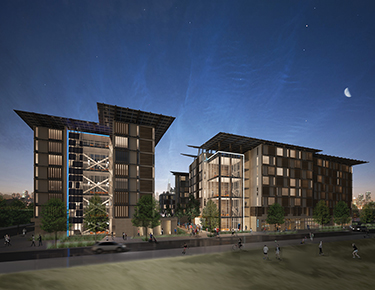 Weber Thompson won an Honor Award in a design competition called Architecture at Zero that was put on by Pacific Gas and Electric Co. and the AIA California Council.

The competition focused on designing a net-zero student housing complex for the University of California, San Francisco Mission Bay campus.

Weber Thompson said in a press release that the winning entry will not be constructed but the university is planning a new student housing project soon. Finalists will be invited to respond to the request for proposals.

The firm said it is hard to reach net-zero in large residential buildings, but this design would allow students to measure and manage their energy consumption with highly visible feedback systems.

The Seattle firm worked with WSP Group on the project, and used a number of tactics to reduce energy use including siting, programming, passive heating and cooling, a heat-recovery system, shading devices and photovoltaic panels.

Energy use would be tracked and displayed in real time through a smart phone app, and color LED lighting would show which floors are saving the most energy. Performance of different buildings in the complex also would be displayed to encourage competition and conversation.

Weber Thompson said such systems could teach people new behaviors and carry through “to their post-academic life, setting the stage for net zero in communities beyond the UCSF Mission Bay campus.”

WSP worked on the building systems, energy and MEP design.