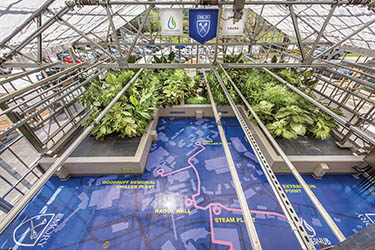 The national engineering firm McKim & Creed won a Grand Award from the American Council of Engineering Companies for a water treatment system called the WaterHub at Emory University in Atlanta.

The US Water Alliance said Emory University won the 2016 US Water Prize for WaterHub, which created an on-site, eco-engineered decentralized water reclamation system. The alliance said the system can displace up to 146 million gallons of potable water with recycled wastewater annually. That's nearly 40 percent of the total water demand on campus.

Matthew Early of Emory's campus services department said, “Not only has the WaterHub had tremendous impact on how we think about water and how it is utilized on campus, it has also become a national model for those seeking innovative technology to address the global need for water conservation and sustainable solutions.”

Jonathan Lanciani of Sustainable Water said WaterHub reclaims wastewater using a natural process: “(It) doesn't actually require a change in the way we live, (it) merely allows us to change what we use.”

The alliance said WaterHub was constructed at no capital expense to the university through a water purchase agreement that uses savings from the project to pay off the cost. It was commissioned in May 2015, and has saved Emory over 40 million gallons of potable water.

The system is expected to save millions of dollars over a 20-year period.