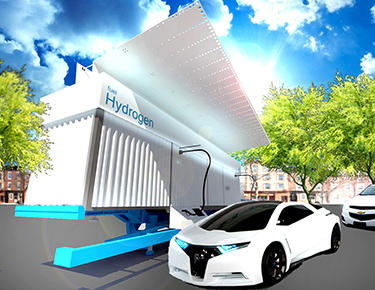 Researchers and students at Washington State University are raising funds to build what they say will be the first hydrogen gas station in Washington.

Jake Leachman, associate professor in the WSU School of Mechanical and Materials Engineering, said, “What we're doing is unique. There are systems that can convert wind energy to hydrogen, but it's still difficult to increase the hydrogen density for transport and storage.”

Toyota, Honda and Hyundai are now selling hydrogen fuel-powered cars in California, but WSU said there are only eight hydrogen liquefaction plants in North America, so it has to be transported over long distances. Hydrogen gas is ubiquitous.

The WSU students' design could allow hydrogen generated from energy conversion to be inexpensively gathered and stored. The team got federal funding and has formed a start-up company focused on dispensing, liquefaction and storage of hydrogen.

The technology uses a mechanical device called a vortex tube to separate compressed gas into hot and cold streams. Fundraising now is needed to purchase equipment, such as a Stirling pre-cooler, a hydrogen compressor, an electrolyzer and a dispensing interface for the fueling station.

More information is at https://hub.wsu.edu/ise/.