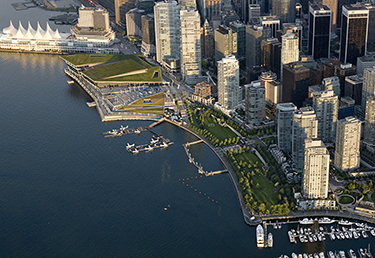 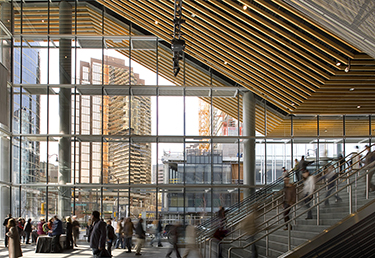 Seattle-based LMN designed the 1 million-square-foot center, which is on a 14-acre former brownfield site, and also covers about eight acres of water. The firm said the project involved the building as well as a new urban district with retail, parking, walkways, bikeways and open space.

The structure has a six-acre living roof with bee colonies that provide honey for the center's restaurant, and an artificial concrete reef below that was designed to help restore the shoreline ecology. LMN said the reef has a “marine habitat skirt” that provides surfaces for a variety of marine life to attach.

A seawater heat pump system cools the center in the summer and heats it in the winter, helping to reduce energy use by about 60 percent compared with typical convention centers.

A system for conserving and reusing water reduces potable water use by 70 percent. An on-site blackwater treatment plant for wastewater — including stormwater from the roof — allows it to be reused for irrigation and other gray water needs.