4 robots designed to teach your kid to code

LAS VEGAS — You've seen apps and toys that promise to teach your child to code. Now enter the robots.

At the CES electronics show in January, coding robots came out in force. One convention hall area was packed with everything from chip-embedded, alphabet-like coding blocks to turtle-like tanks that draw on command. 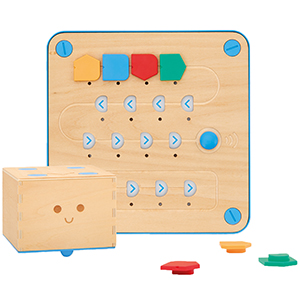 Of course, no one can really say how well these coding bots teach kids, or even whether learning to code is the essential life skill that so many in the tech industry claim. After all, by the time today's elementary-school kids are entering the workforce, computers may well be programming themselves.

But experts like Jeff Gray, a computer science professor at the University of Alabama and an adviser to the nonprofit coding education group Code.org, say kids can derive other benefits from coding robots and similar toys. They can, for instance, learn “persistence and grit” when the toys inevitably do something unintended, he says.

So if you're in the market for a coding robot that teaches and maybe even entertains, here's a look at four that were on display at CES. But beware: None of them are cheap.

London-based Primo Toys, the makers of this mobile wooden block, believes kids can learn coding concepts at age 3 before they can even read. And they don't even need a screen.

The “Cubetto” block on wheels responds to where chip-embedded pieces are put on a wooden board. Different colors represent different commands — for example, to “go straight” or “turn left.”

Kids can bunch together a number of commands into what's called a function and can also make Cubetto repeat actions in a loop.

Pros: Good for parents who want to avoid more screens

Controlling it does require a screen.

The Cambridge, Massachusetts, company also claims kids don't need to be able to read and can start playing with Root at age 4.

Root draws, moves, sees and reacts to touch and various other commands. Kids can use Root to start drawing lines and progress to creating snowflake-like mathematical patterns called fractals.

Co-founder Zee Dubrovsky says his daughter began coding with Root at age 4, and progressed up to the point where her robot drew her name on a whiteboard in school.

Cons: Requires lots of clean, flat surface area, preferably whiteboards. Root has three difficulty levels, some of which wade into deeper math, so parental time commitment could be considerable. The Kickstarter-launched company has taken a while to ship items, so delivery could be delayed

Shipping: June 2018 (although the company has been working to fulfill Kickstarter orders since May 2017)

This bundle of personality on wheels debuted in 2016. It now comes with an app called Code Lab, which allows kids to drag and drop blocks of code that control its movements and animations. They can even access facial and object recognition functions enabled by Cozmo's front-facing camera. 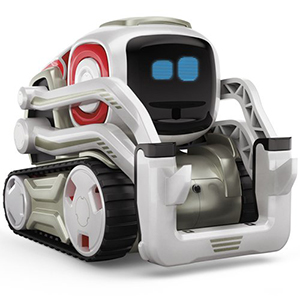 Cozmo, recommended for kids aged 8 and up, looks like a little tractor and can pick up interactive cubes.

Cozmo, recommended for kids aged 8 and up, looks like a little tractor and can pick up interactive cubes, which are included.

Part of its appeal are the twitches and tweets that make it seem like an energetic pet, according to Boris Sofman, the CEO and co-founder of Cozmo maker Anki, based in San Francisco.

Pros: Its expressive eyes and movements make it seem like a little R2-D2

Cons: Because it's so full of personality, there might be a disconnect between programming it to do things and just letting it be itself

This dome-shaped, wheeled dynamo about the height of a few fingers looks for direction right out of the box — and comes equipped to follow around any finger placed before its frontal camera.

The robot makes sounds, flashes lights, moves and can sense and react to its environment.

An app helps kids — aged 8 and up — program Evo to do what they want. The bot's downward facing scanners also let it follow lines drawn on regular paper, some of which embody coding instructions. For instance, blue-black-blue gets it to speed up; green-red-green-red tells it to spin.

Pros: It's cheaper than other coding bots

Cons: It doesn't do quite as much as other bots