You can enjoy Charleston's upscale cachet for a pittance 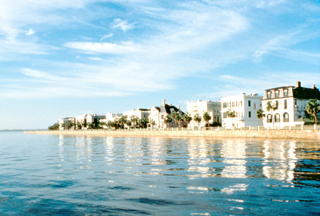 Photo courtesy of the Charleston Area CVB [enlarge]
The White Point Garden, at the south end of the Charleston peninsula, is one of the best places to catch the sea breeze on sultry days. Many of the homes here were built before the Civil War.

CHARLESTON, S.C. — In colonial times, Charleston was America's wealthiest city. Three centuries later it still has an upscale cachet with houses on its historic Battery fetching eight figures and shopping and restaurants rivaling much larger cities.