Myanmar: an anomaly caught in time 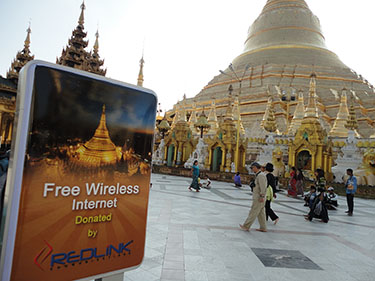 Photos by Seth Millstein [enlarge]
Free Wi-Fi can now be found at Shwedagon Pagoda, a 2,500-year-old Buddhist temple in Yangon. 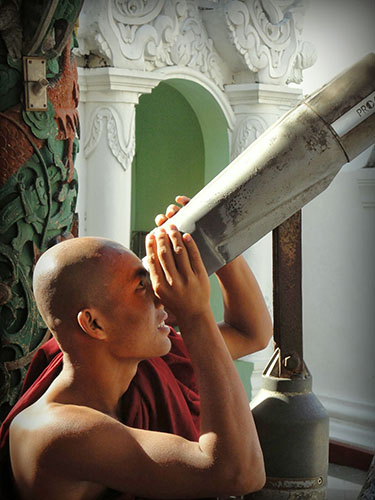 [enlarge]
A monk uses a telescope to view a 72-carat diamond mounted on the tip of Shwedagon Pagoda. An ATM, not pictured, stands behind the monk.

Myanmar has been cut off from the rest of the world for decades. Rigid military rule sealed the country, zipping it tight, for at least the last 30 years, if not since it declared independence from British rule in 1948. In 2005, then-President George W. Bush lumped Myanmar into the “Axis of Evil” with North Korea, Iran and Iraq.

When I told friends I was visiting Myanmar, they said: “Burma — be careful.”

Really there was no cause for alarm. The opposite proved true. Being so isolated for so long has actually allowed Myanmar to remain uniquely preserved, culturally and geographically.

It's not all parades and fireworks though. The people are still among the poorest in the world. And even today, certain border areas are restricted due to ongoing conflict. Foreign journalists and visitors require a special travel permit to visit these areas, primarily in the north and along Myanmar's borders.

So when I landed in Yangon on Dec. 21, the airport took me by surprise. It was obviously new: glassy, clean and modern-looking, though not terribly crowded. Just beyond passport control was a large Coca-Cola advertisement: “Welcome to Myanmar!” And next to that was a giant ad for the new Samsung Galaxy.

Somehow none of this felt like a country that had been sealed shut for so long.

If I had visited in 2009, I would have seen none of this. That's because in 2010 everything started to change.

First, democratically elected Nobel Prize laureate Aung San Suu Kyi was finally released from house arrest in late 2010. Since then the military has remained relatively quiet and the country has changed considerably.

Tourism has grown from a sad little trickle of next to nothing to a real and steady flow when I was there.

Some change, though, is slow. Infrastructure takes time. Even in major cities, ox carts and goats wander out onto main roads. Sidewalks crumble underfoot (my leg was nearly swallowed by one near Mandalay).

I took a few hundred-mile bus ride that lasted 16 hours, including stops. While listening to loud Western music, the driver skillfully steered the bus here and there, skirting potholes so large they had potholes inside them.

Still, it ended up being a great way to spend New Year's eve. Stopping every few hours at restaurants/gas stations, I felt like I ate about nine dinners that night. I'm glad weight loss was not one of my resolutions.

The food across Myanmar was amazing, even at gas stations. Rice is a staple everywhere, and rich curries are common. And everything served is incredibly fresh, so the vegetables are always crisp and ripe, not to mention “more than 100 percent organic” (as one guide on an overnight hike liked to joke).

A typical meal comes with about six plates of pickled side dishes, along with the main course. It's hard to spend more than $5 on an amazing meal and $2 is the norm, unless you hunt out high-end hotels.

Though streets and sidewalks and architecture (other than the airport) may not feel very modern, change is apparent.

Take ATMs for instance. Prior to 2010 there were exactly zero. By the end of 2011, 64 ATMs appeared. As of January, when my trip ended, there had to be at least 500, including one right in the most important Buddhist temple in Myanmar, the Shwedagon Pagoda.

Next year at this time it would be no surprise if several thousand new ATMs show up, blinking and flashing in cities across all across the country.

I love taking pictures when I travel. And so, even though I had no itinerary, I did set a little schedule for myself. Whenever I arrived in a new city, I made a point of getting up early the next morning. I'd get up and head off to the local market right after the alarm went off. I wanted to take photos when the light was right, the air felt still and the traffic was less clotted (air pollution and congestion are on the rise).

Two days before I flew home, I visited a writhing, clotted local market in Mandalay where vendors sold just about everything: produce, eggs, chicken, fish, knock-off T-shirts — you name it.

Or perhaps not. There were things for sale I could never, ever name. Take one barrel of “stuff” I passed. It really could have been fish, soy, squid or even goat. All I know is this: it was cone-shaped, pink and unlike anything I'd ever seen.

And that was enough — no need for further investigation. I took a quick picture then thought about crossing the street, which meant dodging mopeds and wildly over-freighted semis.

I stopped. I noticed someone dodging traffic, walking towards me, with purpose. The woman stopped and handed me a bright crimson flower with a short stem. I thanked her as best I could. She didn't speak any English, and Burmese, the mother tongue, was way beyond my pay grade.

The woman cupped one hand and motioned towards her nose. “Smell it,” she implied, without saying anything. So I did. And I'm glad I listened. The smell was incredible: rich and fragrant, anise and clover.

I carried the flower with me that day and the next, all the way to the airport, where I finally left it, wilting on a window ledge.

That wasn't the first time a total stranger offered something special in Myanmar.

One week before receiving the flower, I rented a moped and drove it out to a hot springs north of a city called Hsipaw.

Renting a moped was a dumb idea.

After a little reflection, I realized that weaving in and out of traffic (semis, buses, other mopeds), armed with a meek little horn and a broken blinker, was proof positive that I don't value my own life quite enough. When I arrived, thankful to be counted among the living, I planted the kickstand, and that's when I realized something else, a bit less important than the value of life. I had forgotten a towel.

So I took a seat and ordered a beer under a canvas tarp near the hot spring, which was really a communal pool used for washing boots, clothes and maybe some relaxation when all of that is done.

A taxi driver approached me. He pulled up a stool and asked why I was not in the pool already. I explained that I had not packed a towel (only part of the reason; the other being that the pool had clumps of soap and debris floating towards the drain). With that the driver sprinted back to his taxi. I hardly had time to work on my beer when he returned. He presented me a checkered blue longyi (a traditional cloth wrap worn by everyone other than tourists, replacing pants — better ventilation I'm told — and similar to a sarong).

It was beautiful. No doubt someone had spent weeks weaving it. Before I could thank him, he sprinted back to his taxi (a VW with the roof cut off, attached to a motorcycle).

When I finally tiptoed my way down some stone steps and into the communal pool, the generosity just kept on flowing. Other than those using the pool as a Laundromat, there was a crew of regulars in the corner — men in their 70s and 80s, just soaking in the natural warmth. And as soon as I got in, the regulars cleared out the prime spot. Just for me, a confused looking tourist.

The best spot was at a crack in the far edge of the pool. That's where the fresh water, hot and clean, streamed in. I spent a minute or two lounging there, before moving away. But the regulars motioned me back just as soon as I started moving. I was their guest. There was no other spot for me: the best spot in the pool was mine, until I finally climbed out and used my new longyi to dry off on the side of the pool.

Myanmar remains an anomaly. It is still generally caught in a very different time. Sometimes after I took a picture, I thought — there's no way anyone at home would believe that was 2014. And that included me. Which is why I hope to return soon.

You see, I would not be surprised if blinking lights from all those new ATMs will be a bit of a distraction. But I don't think the people will change. I think — and hope — that kind of change will take another generation. Until then, it remains an incredible country to visit.

I've seen almost all of Southeast Asia. And I can easily say that Myanmar is the most fascinating of all, by a huge margin. Where else can you get a flower and a longyi just for bumbling around? I can't think of anywhere else.

There will be an exhibit in late March or early April of Millstein's photos, together with four paintings he purchased in Mandalay. The exhibit will be at the office of Dean Standish Perkins, where Millstein leases space. Those interested in attending can email seth@pillar-law.com. A portion of the proceeds from all sales will go directly to a charity benefitting Myanmar. Featured photos can be viewed at pillar-law.com/resources/travel-photos/.