At the Movies: ‘Peter Rabbit' sure to delight young fans 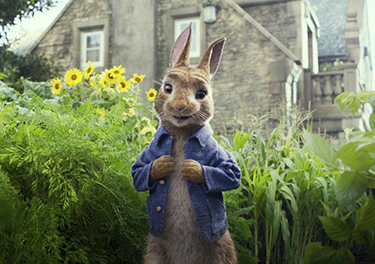 With warm nostalgia for Beatrix Potter's classic children's tale, “Peter Rabbit “ director, producer and co-writer Will Gluck channels the author's earnestness into a sweet film sure to delight young fans.

Adults may find the plot predictable and the pacing a bit wanting, but the dynamic animation and beloved characters help compensate, as does the film's cheeky self-awareness.

As in the book published in 1902, the story begins with Peter Rabbit (James Corden) disobeying his parents' rules and sneaking into Old Mr. McGregor's vegetable garden for a snack.

Old Mr. McGregor gives chase, but Peter and his trusty sidekick, Benjamin Bunny (Colin Moody) elude capture. All the running around gives the old man a heart attack, and Peter assumes all their problems are solved — until McGregor's great-nephew moves in.

Thomas McGregor (Domhnall Gleeson at his most playful) is a tightly wound Londoner who resents relocating to the countryside to care for the property. He's still apoplectic about being passed over for a promotion at Harrods, and that irritation is compounded when he discovers his great-uncle's house and garden are overrun with cotton-tailed cuties he calls vermin.

The rabbits' savior — and maybe Thomas', too — is Bea (Rose Byrne), a kind-hearted animal lover who lives next door. She moved to the country to paint, and her best pieces recall Potter's original “Peter Rabbit” illustrations.

Those illustrations come to life at various points during the film. The simple, hand-drawn animation contrasts beautifully with the slick digital work that comprises most of the movie, inserting realistic-looking talking rabbits into live-action scenes with Byrne and Gleeson.

Peter recruits his younger sisters into the battle for McGregor's garden. Margot Robbie, Elizabeth Debicki and Daisy Ridley respectively voice Flopsy, Mopsy and Cotton-Tail, and while these T-shirt-wearing bunnies are undoubtedly adorable, the top-level talent behind them is underused (with the exception of Robbie, who also narrates the film).

As the conflict over the garden escalates, it becomes clear that Peter and Thomas aren't just fighting over vegetables, but for Bea's affections. It's a modern romantic take on the classic rabbit tale.

Gluck further modernizes the story with a pop-packed soundtrack featuring music from Vampire Weekend, Basement Jaxx and Fitz and the Tantrums.

The main characters' trajectory is easy to anticipate, and the movie knows it. At one point, the narrator describes “a half-thought-out plan that's dangerous, gutsy and convoluted, and in a story like this, pretty much guaranteed to succeed.”

But there are many amusements to be found among the ancillary characters, like a quartet of harmonizing birds who are frequently and unceremoniously interrupted (perhaps a swipe at Disney sweetness?) and a buck who can only repeat “headlights” when he sees a car. Particularly hilarious is a loudmouthed, uncensored rooster who's shocked each morning that a new day has dawned.

There's enough entertainment for parents here, and plenty of good-natured humor for kids. Stay past the credits for an extra dose of laughs.