‘The Wave' about to get more crowded in the Southwest 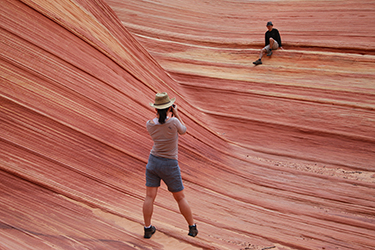 AP Photo/Brian Witte [enlarge]
In this 2013 file photo, a hiker takes a photo on a rock formation known as The Wave in the Vermilion Cliffs National Monument in Arizona.

SALT LAKE CITY — Outdoor enthusiasts and landscape photographers hoping to land one of the elusive permits needed to explore the colorful, contoured landscape of a U.S. Southwestern hike called The Wave will now have a better chance under a new plan announced Monday that allows more than three times the previous number of daily visitors.