Mount Everest: A cancer survivor makes it to the top 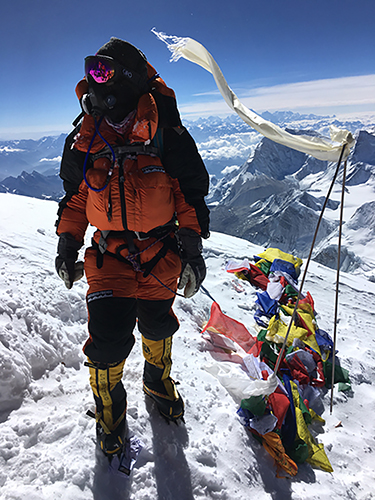 [enlarge]
Lisa Thompson at the summit of Mount Everest. 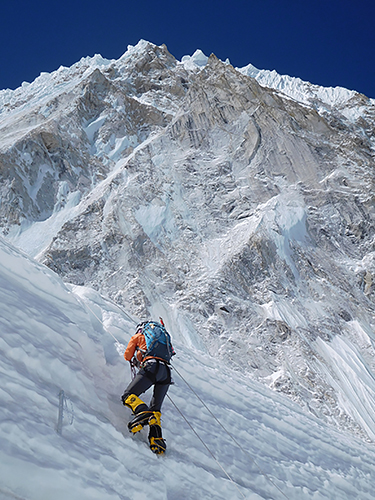 [enlarge]
Outside of base camp at beginning of the Khumbu ice fall.

It is 29,029 feet high, and is considered one of the most dangerous and challenging mountains in the world. The Nepalese people call Mount Everest “Sagarmatha or Goddess of the Sky.” This beautiful yet majestic mountain has taken many lives, but also gives hundreds of climbers the joy of standing on the grand summit.

Enter, Seattle native, Lisa Thompson, who had conquered a big hurdle herself and that was cancer. A few years back, Lisa knew that if she persevered through the treatments, climbing Everest could become a goal worth taking on. In 2016, and middle-aged, Lisa was not going to let all of those frightening stories of ascending the mountain burst her bubble in conquering her dreams. Having a strong and positive resilience to obstacles she knew that a lot of training would be involved; specifically strength and endurance routines. In addition to those programs, she also spent many years cultivating her technical skills at climbing difficult peaks throughout the world.

Lisa started this long journey in May via the South Spur route. Her trek to Everest base camp took about a week, and consists of staying at Tea Houses that has traditional Nepalese dishes such as Dal Bhat. She and other climbers chose the month of May because the wind and snow are usually less fierce in that particular season.

Once she arrived at base camp, the food is similar to that at sea level, and can consist of: pizza, salads, and omelets. But, Lisa said as her journey continued, “Preparing foods is quite difficult while climbing and your body responds to decreased levels of oxygen in the air. The shifts of blood and oxygen move away from less essential body functions like digestion, so I usually ate foods high in carbs and sugar so I would have the fuel that was needed.”

During certain spots on the mountain, there were chilling temperatures of minus 40 below, and that required her body to stay warm. Wearing thick down suits coupled with tripled boots. And the tents were equipped with down sleeping bags that are made specifically for these frigid conditions. Lisa pointed out that staying warm and dry is quite the dichotomy because the climbers are 20,000 feet closer to the sun, and that radiates heat off of the glacier which can feel extremely hot. But in other areas on the mountain, the cold is just as challenging to withstand.

Thankfully, she utilized Sherpas who design the routes on the mountain along with carrying heavy loads of food, gear and fuel for the camps. One of the many obstacles in climbing Mount Everest is lack of oxygen at high altitude, and Lisa did use her oxygen at 23,500 feet.

However, her toughest challenge was running out of oxygen at Yellow Band; which is the rocky part of the mountain and is at 25,000 feet. She could have turned around, but chose to move forward and focus on the climber ahead of her which made her feel mentally strong.

Being the only woman on this particular quest, and having many people from around the world not speaking the English language, it was critical to learn the complex system of head nods and hand gestures as you ascend to the summit. Lisa used mantras to keep her mental state strong when she felt tired or mentally drained.

After enduring this long and arduous expedition, Lisa did indeed make it to the top after 5 weeks. She stood on the summit for 20 minutes and thanked the people and mountain for giving her this opportunity. She then replaced her oxygen bottle and gear. After summiting Everest and learning that mountains humbled and taught her so many things, Lisa said, “I made it through cancer, and was still strong and capable of so much more. I will continue to push myself in future mountain adventures.”