710 ESPN Seattle, owned by Bonneville Seattle Media Group, announced “The Matt Hasselbeck Show” as a weekly program on 710 ESPN Seattle. The new, one-hour show will air each Wednesday at 9 a.m., with the 2021 Seahawks Ring of Honor member joining morning host, Mike Salk. A three-time Pro Bowler, Hasselbeck played for the Seahawks from 2001-2010, including leading the Seahawks to their first ever Super Bowl appearance in 2005. Hasselbeck enjoyed a 17-year NFL career including other stops in Green Bay, Tennessee, and Indianapolis. The inaugural show will air Wednesday, Sept. 15, and will also be offered as a weekly podcast at 710Sports.com. 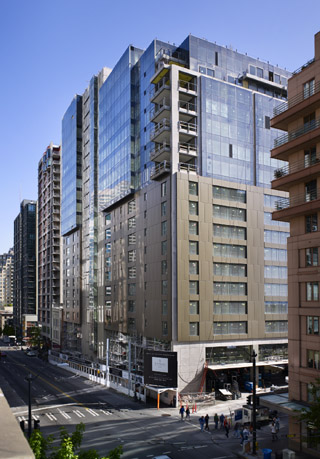 The Four Seasons hotel, with condominiums on top, opened back in 2008 at the corner of First Avenue and Union Street, where the Heliparker Garage once stood. About the same time, parent Four Seasons Hotels and Resorts was taken private in a $3.7 billion deal, with the new owners including Bill Gates and Saudi prince Alwaleed bin Talal. Now Gates-related Cascade Investment LLC has announced its over $2.2 billion purchase of half the prince's 47.5% stake. Four Seasons announced the pending deal, and said Cascade will soon have an over 71% stake in the company, which will have a total value of about $10 billion. Gates' involvement with the company dates back to 1997, when he bought shares in the then-public entity. Four Seasons CEO John Davison said in a statement, “The unwavering support and partnership of our shareholders has and continues to be critical as we capitalize on growing opportunities to serve luxury consumers worldwide.” The deal is expected to close in January.

Woodin Creek Village is the mixed-use development by Weidner Apartment Homes and GGLO in downtown Woodinville. One of its central features is the so-called Wine Walk, which is filling up fast with tasting rooms and restaurants. Woodinville Wine Country will open up shop at 13590 N.E. Village Square Drive. A formal opening and ribbon cutting are expected soon. Dean Weidner said in a statement, “We worked with intentionality to bring an outdoor experience in an urban setting while preserving natural habitats, enhancing walkability, providing for al fresco social activities, and curating commercial tenants that are regional leaders in their respective sectors.” The Wine Walk and larger development now has 11 wineries and eight cafes and restaurants. Among them are Truth Teller, Woodin Creek Kitchen & Tap, Adams Bench Winery, Ancestry Cellars and the Rusty Pelican Cafe. W.G. Clark is underway of Phase III on the 20-acre development. Two more phases of construction will eventually up the residential tally to around 800 units.

StoryBuilt, of Austin, has a few multifamily projects in varying stages of progress in our market. One townhouse project just got a new name: Stanley, with 19 units to be sold after completion at 6600 Carleton Ave. S. in Georgetown. (That's the former home of Hope Christian Community Church, which StoryBuilt acquired two years ago for $2.5 million.) StoryBuilt generally acts as its own designer and contractor, and will break ground this fall, the company says. Prices will run from the low $300,000s for a 400-square-foot studio to the low $800,000s for a 1,750-square-foot, three-bedroom townhouse. The complex will feature a mural from Will Schlough and Urban Artworks to honor Stanley the seal and other marine life. StoryBuilt's Ben Rutkowski said in a statement, “We want to engage with the community by giving back through our non-profit partners as much as we can, to create awareness and help others, animals, and the environment. We have a long-term plan to build big here in Seattle, and this is just the beginning.” Stanley the seal was rescued and later returned to the wild by the local nonprofit SR3. StoryBuilt is nearing completion on the 16-unit Winston in Ravenna, and is planning 215 units in Columbia City.

King Conservation District (KCD) announced the selection of Rosa Mendez-Perez to fill the position of executive director. Mendez-Perez has a background in environmental and climate advocacy focused on issues of equity and community empowerment. She served most recently as the director of the Office of Environmental Justice for New York's Department of Environmental Conservation where she led the agency's Environmental Justice and Indian Nations Affairs programs. She also chaired the Climate Justice Working Group and worked with communities to address their environmental challenges. King Conservation District is a nonregulatory, special purpose district that works with individuals, communities, nonprofits and local governments on a voluntary basis to steward natural resources.

Gig Harbor-based Washington Patriot Construction promoted Mikhail Balasyuk to project manager, Bogdan Tishchenko to assistant project manager, and Zerah Florance and Neil Shaw to senior project managers. Balasyuk interned with Washington Patriot in the summer of 2015 and became a permanent employee in 2016. He started as a project engineer and now primarily leads design-build projects for private clients. He holds bachelor's degrees in architecture and construction management from the University of Washington. Tishchenko was hired in 2017 as a project engineer. He graduated from the UW with a degree in urban planning and design, with a minor in architecture. He provides planning and estimating, and helps develop collaboration tools that provide visual representations of the company's projects. Florance joined the company in 2009 as a project manager and has led some of its most diverse design-build projects. She holds bachelor's degrees in construction management from the UW and architecture from Washington University in St. Louis. Shaw joined the company in 2013, and primarily leads its projects with state and federal agencies. He holds a construction management degree from the UW and serves as a mentor on the company's Project Engineer/Quality Control team.

U.S. Environmental Protection Agency Administrator Michael S. Regan has appointed 34 new members to EPA's Local Government Advisory Committee. Among those asked to serve in this important advisory role for the federal agency is Snohomish County Councilmember, Megan Dunn. Councilmember Dunn is now one of the 39-members of EPA's LGAC. EPA's LGAC includes representatives from 30 different states, Tribal nations, and U.S. territories, representing a diverse cross-section of cities, counties, towns, and communities across the United States. Chartered in 1993 under the Federal Advisory Committee Act, the Local Government Advisory Committee provides independent policy advice to the EPA Administrator on a broad range of issues affecting local governments. The Small Community Advisory Subcommittee was established by EPA in 1996 to advise the Administrator on environmental issues of concern to the residents of smaller communities.

ALSC Architects announced two new hires. Matt Garr, AIA has been hired as a project manager. An Architectural Project Manager with seven years of professional experience, Matt Garr attended the University of Idaho where he earned his Master of Architecture and Bachelor of Architecture. Current assignments include healthcare projects for CHAS Health, Adams County Health Center, and New Health. Laura Somerville, a 4th year interior design student at Washington State University, has been hired as an interior design intern. Laura will be assisting ALSC's interior designers on a variety of projects. ALSC provides professional planning and design services for projects ranging from education to retail, and military to sports and recreation.

Alliant Insurance continues to expand its footprint in the Pacific Northwest, acquiring Biggs Insurance Services. Biggs has an 86-year history of providing personal, commercial, and employee benefit solutions to businesses and individuals in Washington, Oregon, and throughout the Pacific Northwest Region. Biggs is one of the largest locally owned, independent agencies in both Vancouver, WA and Portland. Biggs and its team of almost 60 insurance professionals will join Alliant and will continue servicing clients from its Vancouver headquarters. Terms of the agreement were not disclosed. Alliant Insurance Services is a leading distributor of diversified insurance products and services.

Seattle-based ModusBox announced a partnership with DocFox, an SaaS-based automated business onboarding tool for financial institutions. The two companies provide solutions that enables banks and credit unions to unlock access to banking core data and rapidly onboard any new business. DocFox provides a white-labeled, paperless experience that handles document collection and validation through automated analysis, performs enhanced review and screening of high-risk customers, and a single point of view for real-time tracking of Bank Security Act compliance. DocFox is used by over 200 financial institutions to automate their account opening processes. It provides intelligent, highly customized workflows for any type of client. ModusBox is a financial services technology company focused on open banking solutions that unlock access to banking core data and eliminate vendor dependencies.