Pacific Program Management added two new positions to its senior leadership team: Deb Hamm is vice president of people, culture and operations; and Ron Houghtaling is vice president and senior director of marketing and communications. Hamm has created workforces in rapid builds, integrations, acquisitions, mergers and high-volume recruiting at companies including Southern Glazer's Wine & Spirits, Colliers International and JPMorgan Chase. Prior to joining PPM, she ran her own consulting practice and has over 25 years of business experience. Houghtaling comes from Marcus & Millichap, where he led the corporate marketing team as vice president in support of over 2,200 brokers and agents. He also spent 17 years with CBRE in a variety of design, branding and marketing leadership roles. Hamm is working at the Seattle headquarters while Houghtaling is based in Los Angeles. Additionally, PPM announced the launch of a dedicated Life Sciences Practice, its first industry-focused team that follows growth over the past two years into key markets in New York, San Francisco, Los Angeles and Washington, D.C. This practice is led by Annette Walter, who has over 30 years of experience in design, laboratory space planning, project management and move management. She joined PPM in 2017 from Stanford University School of Medicine, where she was project manager of facilities construction. PPM is a commercial real estate program and project management firm with teams across North America.

Dr. Dino Rech is the new CEO at Seattle-based Audere. Rech is a global health leader, published researcher and ER physician with knowledge of how technology can both help and hinder clinical workflows. He replaces Audere founder Philip Su, who remains as an advisor. Rech was group director and regional chief operating officer of The Aurum Institute, where he managed the organization's business development team and led one of the largest HIV care and treatment programs in South Africa. Rech also was founder and CEO of the Centre for HIV and AIDS Prevention Studies, which reached over 500,000 people with lifesaving HIV prevention, education, testing and surgeries during his tenure at the organization. Audere is a digital health nonprofit developing solutions to improve global health in underserved communities. It is funded by grants from the Bill & Melinda Gates Foundation and Justworks.

Urbanova's board of directors is launching a search for its next CEO to succeed Kim Zentz, who will step out of the role in November. Urbanova selected executive search firm Herd Freed Hartz to conduct the recruitment. The chief executive officer, who reports to and is a member of the board of directors, has responsibility and accountability for managing and accelerating Urbanova's strategic, programmatic and financial/operational activities. The CEO also is responsible for recruiting, managing and supporting senior staff; and helping them to align and execute priorities. Headquartered in Spokane and incorporated in 2016, Urbanova is an urban innovation partnership focused on driving equitable solutions for midsize cities. With partners that include Avista, the city of Spokane, Itron, McKinstry, University District Development Association, Washington State University, Verizon and Gallup, Urbanova builds multi-sector collaborations, develops technology and harnesses strategies to create more resilient communities.

Local investor Thayer Manca Residential has a large and growing presence in Arizona. The firm just announced its $69.3 million purchase of the 338-unit Desert Shadows, in Tucson. TMR's Joe Manca said in a statement, “Our current Tucson properties have proven that the Tucson market is one of the most dynamic and evolving rental markets in the nation. The timing of the Desert Shadows acquisition presented our investment partners the opportunity to reinvest their proceeds from a recent sale by utilizing a 1031 exchange.” TMR plans to invest about $6.8 million in renovations, which may include a new name for the complex. 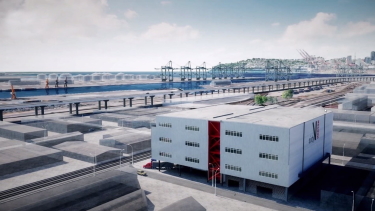 Ryan Cos. announced its recent groundbreaking at 65 S. Horton St. in SoDo. With financial partner GTIS Partners, of New York, the plan is to demolish four old industrial buildings for a new four-story logistics and industrial building with about 124,646 square feet. Ryan will build the project, which was designed by Nelson. Ryan's Marc Gearhart says it'll be Seattle's second multilevel warehouse; the first was Georgetown Crossroads, by Prologis, which is entirely leased to Amazon. Ryan acquired the SoDo site two years ago almost $5 million. Bill Condon, Matt McGregor, David Abbott and Greg Inglin of Colliers are brokering the new space.

It won't happen until the end of March next year, but Visit Seattle will have to find a replacement for the retiring Tom Norwalk, its president and CEO. He's been with the hospitality promotion and advocacy group for 15 years. He said in a statement, “It's been the journey of a lifetime and the greatest professional honor to promote and market the city that I love. While there's no great time to say goodbye, I am confident we have the right team in place to keep Seattle's momentum going.” Visit Seattle's board of directors will conduct a new executive search, and plans to announce Norwalk's successor before his official send-off.

Gordon & Rees Scully Mansukhani continued its national expansion, with the opening of its 72nd office, in Spokane. Meredith Thielbahr is the office managing partner. The Spokane office has seven experienced partners that work in a variety of practice areas, serving clients in eastern Washington and northern Idaho. The attorneys work closely with other offices in the region, including Seattle, Portland and Boise, as well as Gordon & Rees attorneys across all 50 states. The Spokane team has experience in a wide-range of issues across many practice areas, including business transactions; cannabis, hemp and CBD; construction; commercial/civil litigation; environmental/toxic tort; product liability; professional liability defense; employment law; ERISA; insurance; intellectual property; life, health and disability; and cyber, privacy and data security. In addition to Thielbahr, other attorneys practicing in Spokane are Allen Estes, Donald Verfurth, Mark Tuvim, Sarah Turner, Nicole Demmon, David Silke, John Leary and Richard Sybert. Gordon & Rees was founded in 1974 and has over 1,000 lawyers nationwide.

The ongoing global semiconductor shortage continues to affect some industries, including the automotive sector. The shortage has reduced Paccar's truck deliveries in the third quarter by about 7,000 vehicles — now about 33,000 vehicles compared to 40,100 vehicles delivered in the second quarter of 2021. Paccar anticipates that the semiconductor shortage and associated production inefficiencies will continue in the fourth quarter, with global truck production strengthening when the supply disruptions are resolved. Global demand for the new Kenworth, Peterbilt and DAF trucks remains strong, according to the company. In addition to its light-, medium- and heavy-duty trucks, Paccar also designs and manufactures advanced powertrains, provides financial services and information technology, and distributes truck parts.

Tour the new Amazonland with NAIOP

Tuesday, Oct. 12, will be the date for NAIOP’s very well timed Amazon Eastside Campus Tour. And just this week did Amazon CEO Andy Jassy say at a GeekWire event that, “We have a lot of people in Seattle, but we also have a lot of people in Bellevue, and it is where most of our growth will end up being.” That sound of champagne glasses clinking can be heard all the way across Lake Washington. Developers who’ve already benefited from Amazon’s eastward push include Hines, which developed Tower 333 and the new Summit III, then sold them to KKR. Both are leased to Amazon, and both are on the NAIOP tour. The event starts at 4 p.m., with proof-of-vaccination cards required. Oh, and you’ll have to sign an Amazon NDA, too. Details and registration: http://www.naiopwa.org.