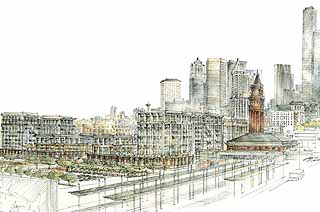 King County officials will unveil plans today for a $230 million-plus transit-oriented development on the Qwest Field north lot that will bring nearly 1,000 units of housing and retail to an area that has waited decades for redevelopment.

The 862,000-square-foot complex will have two seven-story apartment buildings and two 15-story condo towers. It will have 34,000 square feet of ground level retail — including a grocery store.

The county selected co-developers Opus Northwest and Nitze-Stagen & Co. to build 394 condos and 422 apartments. The Seattle Housing Authority will build 140 affordable apartments. The other apartments and condos will include market rate, workforce (less expensive than market rate) and possibly more affordable units. Sizes and prices ranges have not been set.

While the county has accepted the Opus/Nitze-Stagen & Co. proposal, it now must negotiate a final contract.

Blaine Weber, a principal with Weber + Thompson, the project’s design architect, called it “the most extraordinary transit-oriented development in the country.”

The development is a short walk to the downtown bus/light rail tunnel, commuter trains and Amtrak at King Street Station, and not far from the Colman Dock ferry terminal.

Weber said the goal is to build a sustainable community, not just green buildings. The project team is exploring a number of green elements such as using rain to water plants and create water sculptures, incorporating solar collectors and/or wind generated electrical power, and using a system of below-ground tubing to filter potable water. The water would have to be heated or cooled less than if a conventional system were used, he said.

The developers will pay the county $10.1 million for the 3.85-acre site, the minimum required.

Ground breaking is set for mid-2008. The project will be done either in phases or all at once, depending on market conditions, said Kevin Daniels, Nitze-Stagen president.

Opus Construction will be the contractor. Zimmer Gunsul Frasca Partnership is the master plan architect. Arup is the sustainable designer.

The Pioneer Square community has tried for years to get more market rate housing, a grocery store and more retail in the area.

But the north lot is in the Pioneer Square Preservation District, where building heights are limited. It also sits on what used to be tidelands and the water table is high, making it a difficult and expensive site on which to build.

The Washington State Public Stadium Authority, which operates Qwest Field, owns the southern half of the lot and had said it doesn’t want construction that would limit its ability to stage trade shows. (The county has an agreement with the authority to provide parking).

Ann Kawasaki Romero, executive director of the Public Stadium Authority, said in a statement the PSA supports efforts to redevelop the south downtown area, but the changes should “complement or enhance the operation of existing facilities.”

The PSA board, she said, has not yet reviewed the proposal, but expects to receive a briefing from the county and the developer. “We will be better able to discuss the merits and impacts of the county’s future plans for the north half lot after that briefing has occurred.”

Daniels said his company has invested in the south downtown since 1990.

“This is just another part of what we feel will be really beneficial to Pioneer Square, the International District and south of downtown,” he said.

The development is designed with 1,035 parking spaces on four levels in the center. Retail and row houses would surround that, and condos and apartments would be located above the parking. Only one level of parking would be below ground because of the high water table.

Five hundred stalls of surface parking now on the north lot would be replaced with spaces in the garages.

Daniels said Opus and his company decided to have Seattle Housing Authority build the affordable apartments because they thought SHA would do a better job. Construction costs for all but SHA’s portion are $230 million, he said. A representative of SHA could not be reached at presstime.

The development has long been a dream of County Executive Ron Sims. Sandeep Kaushik, Sims’ spokesman, said the developers worked hard “to create a project that really fosters a sense of community for those who live there. It’s not just a box full of housing.”

“It’s an amazing opportunity to help revitalize Pioneer Square and bring in much needed amenities,” he added.

The county asked for a minimum of 400 units, of which 100 had to be affordable for rent or for sale.

This development exceeds those requirements by a wide margin, Kaushik said.

Wright Runstad & Co. and the Murray Franklyn Family of Companies also submitted a proposal, but it did not include the minimum number of affordable housing apartments, Kaushik said. “They felt that they couldn’t provide the level of affordable housing that we wanted and have the project pencil out for them.”

Representatives of Wright Runstad and Murray Franklyn could not be reached for comment.