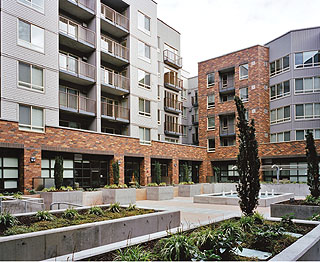 Photos courtesy of Weber + Thompson
The Neptune Apartments in South Lake Union has a European-style courtyard, which is open to both residents and the public.

Construction recently finished on the Neptune Apartments, a mixed-use development in South Lake Union. As tenants begin to move in, more than half of the 234-unit building is already leased.

“We delayed the project during a market downturn, but we had no idea we'd be able to deliver at such a fantastic time,” said Matt Segrest, senior vice president of Simpson Housing, the project owner. “We're already achieving rents above original 2009 projections. We don't see any slowdown in the rental market.”

Dupre + Scott Apartment Advisors forecasts Seattle rents will climb about 16 percent, from an average $856 to $1,000, between now and December 2008.

“Anything below 5 percent suggests a strong market,” he said. “A couple years ago, it was in the 7 to 8 percent range.”

“We expect the market to get tighter in the next couple years,” he said, referring to rental properties in Belltown/South Lake Union.

The Neptune is located at 912 Dexter Ave. N., a block from the planned South Lake Union Park. The 12-acre, $20 million park will be a regional destination and many units in the Neptune have views of the lake. 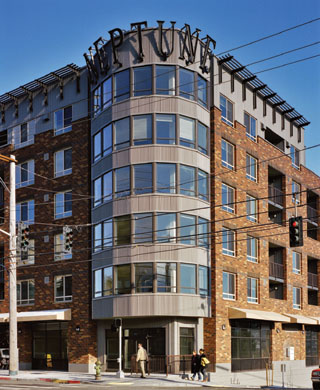 The 234-unit building recently opened and more than half the units are leased, demonstrating a strong rental market in Seattle.

“The Neptune represents a critical element of the South Lake Union story,” said Segrest. “It shows the continued market acceptance and viability of the neighborhood.”

Architect Rick Nishino of Weber + Thompson said the Neptune was designed to complement the newer office and mixed-use structures in the area while also recognizing the older industrial buildings.

Concrete and metal elements on the Eighth Avenue side echo the area's historic warehouse buildings.

The Neptune is designed around an interior European-style courtyard, which is open to residents and to the public.

The original design called for retail spaces in the courtyard interior but, after studying the market, Simpson Housing decided to go with urban lofts. The units feature stained concrete floors and 13-foot-tall exposed ceilings. All of the retail-level lofts have been leased.

Group Health Credit Union, Dexter Deli and two specialty spas are leasing the majority of the 13,400 square feet of ground-floor retail space at the Neptune. Ewing & Clark is the retail leasing agent.

The Neptune is the fourth major collaboration between Simpson Housing and Weber + Thompson. They have also paired up for the Solara apartments, Harrison Square and Penterra Plaza.