Colman Center will bring a new look to Post Alley 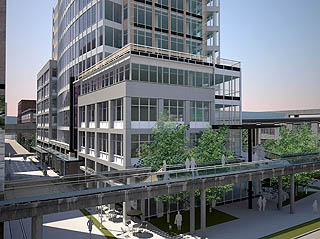 Triad Development and Goodman Real Estate are expected to start construction later this month on Colman Center, a 12-story office building slated for a site bounded by Columbia and Marion streets, Post Alley and Western Avenue.

Tim Dickerson, investment manager and project lead for Goodman, said the city gave them final approval a week ago. A master use permit is expected in two to three weeks. He said preliminary work, including soils testing, has begun, and groundbreaking will follow in three to four weeks.

Architect Blaine Weber of Weber + Thompson compared the design to a Macintosh among Seattle's “PC” buildings. He said it will be sculpted, not a box, and will have a curvy facade facing the waterfront with a lot of floor-to-ceiling glass.

Weber said the interior design will allow tenants to create their own identities. The space will be open, with a loft-like aesthetic. The spaces will have a residential feel, he said, with a deck or terrace on each level so employees can work outside.

Weber said the building is designed for creative agencies, such as architects and graphic designers. Its design will encourage interaction between tenants in areas such as lobby alcoves.

“You can find this concept in New York City, but I don't think it exists in Seattle,” he said.

Plans have changed recently to have all parking on three levels below-grade. Weber said that allows the office floors to have 12-foot ceilings.

The building will tie into the pedestrian bridge that connects to the ferry terminal along Marion. Also, a staircase will be added to the bridge so that pedestrians can access Post Alley. A number of restaurants and shops are planned along Post. Paving stones will replace the asphalt.

Dickerson said the 185,000-square-foot building will be silver or gold LEED certified when it's finished in the first quarter of 2009.

Triad and Goodman have made presentations to about 15 potential tenants for the 170,000 square feet of office space. The remaining space is open for retail and restaurants.

Dickerson said they are asking $32 to $38 per square foot for office space and probably in the $20-range for retail. Both are triple net.