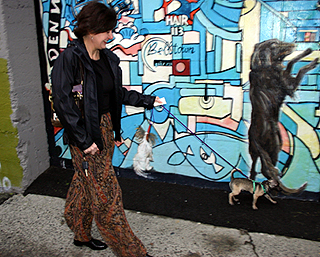 When the downtown condo complex Escala opens in the summer of 2009, dog owners will have a lounge where they can watch through a large glass window as their pooch plays in the adjoining dog run.

“You talk about the dog lounge and their eyes light up,” he said.

This is just one in a line of Fido-friendly amenities multifamily developers have conjured up for their downtown projects. Many condo buyers have dogs and more off-leash areas and doggie day care businesses are springing up to serve them.

“We're working on 12 towers now in downtown Seattle and every single one of them has some type of facility for dogs,” he said.

Some developers have even considered putting kennels in their projects, but decided downtown Seattle has enough, said Dean Jones, principal with Realogics, which markets downtown condo projects.

“We don't get yellow school buses that pull up in front of our condos. We get these big vans with paws on them,” said Jones.

Belltown's Cristalla, which opened in 2005, was one of the first downtown condos to include a rooftop doggie park, Weber said, and “it was an amazing success.” Weber, who lives at Cristalla, said the big gravel patch in the sky is also conducive to human interaction.

“There's a real social aspect to it,” he said.

The Seattle Animal Shelter estimates there are 125,000 canines in the city. Dog owners out with their pets put more eyes on the streets, deterring crime and making the city more livable, said Don Jordon, the organization's director. Seattle officials recognize in-city dog ownership is a trend, he said, and that owners are willing to expend “substantial resources” on their pets. The city enacted legislation last year allowing doggie day cares in non-industrial areas, and it has been expanding the number of off-leash areas downtown, he said.

Condo buyers are demanding more canine conveniences, said Ben Kakimoto, an agent with John L. Scott Real Estate. Kakimoto rates the Fido friendliness of complexes at his livingnorthwest.com Web site, noting whether they accept dogs or have size or breed restrictions. “Four paws” means the welcome mat is out for Fido; an “unfriendly condo” rating indicates dogs need not apply.

Lis Soldano, an Intracorp vice president, said her Seattle-based company is responding to the urban market's demand for pet-friendly amenities.

“People have furry friends,” she said. “They don't have kids. Their pets are their companions. Instead of ignoring it, we're embracing it, because that's what our buyers want.”

In Expo62, a 114-unit condo development under construction in lower Queen Anne, Intracorp will have a rooftop deck area where dogs can do their thing and a doggie footbath near the elevators, complete with small towels for drying paws.

Harbor set up a “hitching post” for dogs outside the Paddy Coyne's Irish Pub at Alcyone. The “post” is the metal tail of a dog sculpture that Senior Project Manager Martha Barkman had elongated and fitted with a “bone.” The developer got the city's permission to imbed “paw” prints in the sidewalk leading from a nearby fire hydrant to the sculpture. The pub keeps a dog bowl filled with water.

Harbor started allowing canines of any weight at its apartments in 2002, said Barkman. Many Seattle landlords still limit the size of dogs, as Harbor did previously, out of concern that larger ones might be rambunctious in elevators or scratch surfaces, Barkman said. But the firm found this wasn't a widespread problem.

Alcyone and Vulcan's apartment project Alley24 do, however, require a “dog interview process,” according to Vulcan. A leasing agent talks to the owner and assesses if the dog is aggressive and how well it would do in an apartment. Owners are also required to ask if fellow elevator riders mind if their dog gets onboard.

Vulcan's South Lake Union 2200 condo project has a dog walking area on its rooftop deck. It's Enso, Rollin Street and Veer Lofts condo developments, now under construction, will allow up to two dogs per unit, with no weight or breed restrictions, although the condo board can change those rules.

Strobele of Lexas said he began to feel this canine captivation thing had legs when he saw how heartbroken his parents became at their dog's death. Still, he said he's surprised at the popularity of Escala's dog lounge.

“It was one of the things in real estate development that you just don't realize how big it's going to be.”