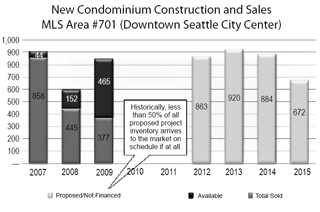 Source: Realogics [enlarge]
This chart illustrates total unit deliveries for new condominiums in downtown Seattle. There are no unit deliveries expected in 2010 and 2011.

Despite the souring housing trends that appeared omnipresent, the market for downtown Seattle condominiums was resilient last year, relatively speaking.

The Northwest Multiple Listing Service reports pending sales were down by 27 percent in the city center yet median home prices were only 2.13 percent lower for the year over 2007. That's a fraction of the 11.2 percent year-over-year home price correction for the greater Seattle Metropolitan Statistical Area, according to the S&P/Case-Shiller Home Price Index. And while Zillow.com reports that nearly 20 percent of regional homes sold in 2008 were sold for a loss, the vast majority were in outlying areas, which indirectly suggests that market fundamentals are indeed better the closer you get to downtown.

These dynamics offer more proof that real estate is intensely local and demand is never evenly distributed. The media can afford to generalize but buyers can't. What's happening in one neighborhood or at one development doesn't speak for the next. Still one aspect of the marketplace now appears to be universal: inventory is continuing its downward trend.

New listing activity for resales in downtown Seattle (NWMLS Area #701) has steadily declined for each month since April of 2008 (year-over-year). And given the lack of new construction starts, what we see being developed today may be all we get for a while.

The unavailability of commercial financing coupled with sky-high construction costs has deferred all proposed condominium and mixed-use developments. No groundbreakings have occurred since the credit crunch began 18 months ago, so it's unlikely that any new inventory will be delivered until 2012 or even beyond.

In addition to resales, supply also may come by way of foreclosures or short sales, presale rescissions or investor resales, but no housing glut is expected. Fortunately, very few in-city homeowners have negative equity and distressed sellers are finding buyers if truly motivated. Presales have been traditionally targeted to principal residents or second-home owners and not investors. For the most part, buyers are carefully pre-qualified for their mortgages and virtually all new presales includes an occupancy addendum, which squelches any motivation to “flip” properties within the first year of ownership.

These policies were adopted in 2006 as local developers watched the deterioration of overheated markets in Florida, Nevada, Arizona and California where loose credit, speculative fever and developer exuberance a few years ago sealed the fate of those markets today.

For once, Seattle's reputation for being a late bloomer provided a valuable education without the steep tuition costs. Yet many would-be buyers continue to watch from the sidelines in hopes of a market correction to match expectations created by the media. Others realize that market timing isn't just about price, it's about preferred selection and favorable financing.

Buyer activity is up. Consider that the Fed has pushed mortgage rates down to lows not seen since 2003, the last time the market rebounded following the 2000/2001 recession. According to Jeff Bell, a mortgage banker with Cobalt Mortgage, an interest rate drop of 1 percent is effectively equal to a 10 percent discount on the purchase price. So lower payments afforded by today's record-low mortgage rates may be of greater benefit to buyers than hoping for further price corrections in many situations (assuming the borrower is qualified).

It'll be interesting to watch how the market finds balance over this coming year. When it comes to the downtown market, demand can rise much quicker than supply considering that high-rise condominiums require time to be designed, permitted and built.

And so another cycle begins. Ultimately, the market pendulum remains in perpetual motion and the bottom of any cycle won't be known until it has already past.

Dean Jones is a principal of Realogics, a Seattle-based real estate research, sales and marketing firm, which handles a number of downtown condominium projects. This article includes contributions by Marco Kronen of Urban Condominiums, which also works with buyers and sellers of in-city real estate.