Those who doubt whether small and humble are good traits to bring to a development project haven't been paying attention to what's been occurring on Seattle's Capitol Hill, where Calhoun Properties and Kauri Investments opened Videre, a congregate-style apartment project, last summer.

The 46 units average 130 square feet. (That's not a typo.) Each comes with its own bathroom, bed, table, chair and fridge. Tenants share very basic kitchens — one for every eight units — and pay $495 to $650 per month, which also covers utilities, including broadband Internet. Videre leased up pretty much right away and today there's no vacancy. So it's no surprise that Kauri and Calhoun have been raising rents. 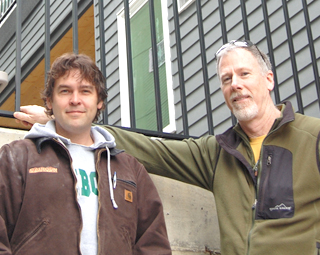 “Residents speak with their checkbooks,” says Dirk Mulhair, who operates Calhoun Properties with his father, Gary.

Now comes the real stamp of approval from someone with an even bigger checkbook: Sound Community Bank. It is providing permanent financing at a fixed rate of 7 percent for 10 years with 30-year amortization. These days, that's “pretty awesome,” says Kauri Chairman Jim Potter.

Despite the project's solid economics, lining up financing wasn't easy. Community banks are under pressure not to lend on commercial real estate in general. The Videre, with its tiny units — “apodments,” Dirk Mulhair calls them — and communal kitchens, is especially difficult. For Fannie Mae and Freddie Mac, which will still finance multi-family projects, the unique character of Videre put it out of their comfort zone, said mortgage broker Dan Piantanida, vice president of GP Realty Finance, the Bellevue company that lined up the deal.

“We've just never seen a product quite like this,” he said. “It took some education on our part.” Once he went over the economics with Sound Community Bank representatives and had them visit Videre, which is at 216 23rd Ave. E., the deal was done.

Piantanida said it's ironic that these days, when experts say that the region's apartment vacancy rate is headed toward historic highs, it's easier to secure standard financing for apartment projects than nontraditional multi-family developments, such as Videre and Calhoun Properties' other boarding house-like properties.

Calhoun owns a total of 140 units in the University District and Capitol Hill, including the ones at Videre it owns jointly with Kauri. All 140 units are leased, Dirk Mulhair said.

The idea of rooming houses — all that density along with what Dirk Mulhair says is their reputation as “crack-ridden, slum-lord-owned, rundown places” — is enough to scare off even the boldest of investors and the bravest of tenants. He says the key to operating a successful boarding house is a hands-on management style that emphasizes respect and dignity for tenants. “We are very customer-driven.”

Calhoun and Kauri refer to their tenants as “partners.” Dirk Mulhair says he knows every resident by name. The process of signing a lease is thorough. Properties have onsite managers and security systems, and the buildings are regularly maintained.

Residents range from baristas to white-collar professionals who live outside the city but want a place to stay when they're in town.

The formula works in good times and bad, according to Piantanida's research. Over the last five years, he says, the vacancy rate for these kinds of projects is less than 1 percent. Plus, Seattle “needs this kind of housing.”

“There's a very deep market for this kind of product,” says Potter. The key is finding in-city sites close to transit lines, grocery stores and other necessities.

Not surprisingly, he and the Mulhairs plan to build more “apodments.” Potter talks about doing three this year, and says he's talking with the Seattle Housing Authority about a project at Rainier Vista. He has another site lined up in Seattle but won't say any more about that until the deal closes this spring.

Moving on, with encouragement

It's striking the number of personnel changes since the market's downturn.

It was particularly noticeable at NAIOP's South Sound Real Estate Forecast last week in Tacoma. Here was a room full of development managers and other consultants, many of whom used to work for large companies. After being laid off or leaving on their own, they're either with new firms, out on their own or still pursing the next job.

These transitions can be tough to talk about, but keynote speaker Lynn Michaelis, former chief economist for struggling Weyerhauser, deftly explained how he left his longtime post to start Strategic Economic Analysis.

“I was encouraged to move on,” he said.

So were many others.

Haven't we met before?

We have — several times. I am back at the DJC again, covering the real estate beat and back writing the Buzz. For what it's worth, I seem to have a proclivity to slide into the Buzz seat when the real estate market starts heating up again.

We'll see how that turns out this time.