Developer moves ahead with tower for Federal Way 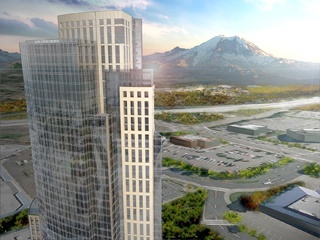 Here's the plan: Develop the tallest building between Seattle and Portland, then watch it fill up with tenants, mostly from Korea, who are investors in the project.

And put that 45-story building in Federal Way, where the tallest building today doesn't even reach 10 stories.

This is what Twin Development LLC wants to do with its Sky Hotel and Residence, which could open in 2014. The LLC includes Seattle developer Steve Smith and Korean-American businessmen Luke Hwang and Pom Qwak.

The project would be built on about 1.8 acres where the Azteca restaurant used to operate. The site is off 23rd Avenue South, kitty-corner to the city's transit center.

Smith said the 1.1 million-square-foot project would cost $235 million to develop and could break ground in about a year. He plans 400 condominiums, 120 hotel rooms, 20,000 square feet of retail and restaurant space, and 16,000 square feet of office space.

The hotel would likely be a three-star boutique priced around $100 a night. Smith said the city is a two-star hotel market, with the higher end hotels charging about $80 a night.

Twin Development is talking to MTM Luxury Lodging about managing the hotel. MTM manages the Hotel 1000 in Seattle and the Woodmark Hotel on Kirkland's Carillon Point.

When the hotel comes on line, it may have some competition from several others planned in the city, including a 143-room Hampton Inn under construction on Gateway Center Boulevard South that is expected to be finished in June, and a permitted 90-room Holiday Inn Express across Pacific Highway from the Crossings shopping center.

A 124-room Marriott Residence Inn is also slated near the Crossings, to the south on the same side of Pacific Highway. Its developers have obtained land-use approval.

Smith said his building would have a concrete core with a steel and glass curtainwall. A 40,000-square-foot public plaza is planned for the street level and a swimming pool is planned on the top floor for condo owners.

“It's going to be first-rate luxury condo tower,” Smith said.

Patrick Doherty, Federal Way's economic development director, said Twin Development has submitted pre-application materials for the project, which is far enough away from Sea-Tac Airport that the tower's height shouldn't be a problem for aircraft.

Doherty said Federal Way's building code was set up to accommodate taller buildings, even though the tallest building is just nine stories. “We have flexibility in the administration of our height limits.”

He said the city is pursuing a code amendment to better define the criteria used for the “flexibility” issue.

Twin Development is counting on Korean and other foreign investors to fund most of the project through the EB-5 Immigrant Investor program, which grants foreigners permanent resident status in exchange for investing in projects like the Sky Hotel and Residence.

“If not for the EB-5 program, we would not be able to do this project,” Smith said. “We're excited to use this EB-5 investor program. As a country, we should figure out more ways to attract foreign capital. Look at Vancouver, B.C.”

Federal Way was designated a “regional center” under the program last fall by U.S. Citizenship and Immigration Services. Investors will likely have to shell out $1 million or more to get green cards for themselves and their immediate families.

“We expect most of our investors to convert their investment into a condominium or two,” Smith said, adding most of them will likely come from Korea.

Doherty said he is seeing interest from Koreans who want to live in the Seattle-Tacoma area. He said Korea is the state's fifth largest trading partner and Koreans make up the largest group of foreign students in Washington. Also, Korea has come out of its recession, he said.

A delegation of Federal Way officials in late March will travel to Korean sister city Donghae. The trip will include a stopover in Seoul, where Doherty and others will hold a marketing event touting Federal Way's attributes to investors and developers.