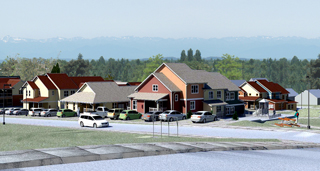 Images courtesy of GGLO [enlarge]
Other apartment complexes will be built in Seola Gardens in later phases, including the 87-unit Fairwind shown here. Fairwind should start in the spring of 2012.

Providence Health & Services of Washington has been awarded nearly $9.1 million to construct 65 apartments for low-income seniors and people with disabilities in the King County Housing Authority's Seola Gardens community in White Center.

Work on the Providence Joseph House senior complex should start in spring of 2011 and be complete at the end of 2012, the authority said.

GGLO is the architect for the complex and two other apartment phases that will be built in the community. Those phases are tentatively called Zephyr and Fairwind. Zephyr will have 25 units and Fairwind will have 87.

Walsh Construction is the contractor for Zephyr. Site work is under way on that project and construction is expected to start soon, KCHA said.

No contractor has been determined for Joseph House and Fairwind. Construction of Fairwind should start in the spring of 2012.

All the Seola Gardens apartments will be owned by tax credit partnerships, KCHA said.

[enlarge]
Work on the 65-unit Providence Joseph House senior complex should start in the spring of 2011.

The $9.1 million for Joseph House is part of more than $550 million in grants announced recently through the U.S. Department of Housing and Urban Development's Section 202 and Section 811 supportive housing programs for elderly and disabled households, according to KCHA. The grants will be used for 169 projects in 46 states.

Additional funding for Joseph House is through KCHA, low-income housing tax credits, a $1.5 million low-interest loan from the Washington State Housing Trust Fund and other sources.

The housing authority is providing a construction-ready site for the complex, which is part of the redevelopment of Seola Gardens, the former Park Lake Homes II public housing community at Fourth Avenue Southwest and Southwest 108th Street. It is near Greenbridge.

Providence Health & Services will lease the site long term and work with the authority to construct the new five-story building that will contain 54 one-bedroom and 10 two-bedroom apartments for very low-income tenants. One unit will be for a resident manager. Six of the units will be accessible to disabled people and one is for people with sensory impairments. The remainder will be accessible to people in wheelchairs.

The complex will also have underground parking and 6,500 square-feet of community space. Service providers include Neighborhood House, YWCA and Highline Community College.

The Seola Gardens site is being redeveloped to serve people with a mix of incomes, but it will retain the same number of federally subsidized units for extremely low-income households on-site, KCHA said.

Besides the 177 apartments, the community will include 107 for-sale houses. Some of those lots will be for sale to developers in the fall of 2011, KCHA said.

The Section 202 program expands the supply of affordable housing with supportive services for the elderly by providing money to nonprofits that develop housing for very low income seniors. Residents pay 30 percent of their income for rent and utilities.

An affordable housing shortage for the region's poorest seniors was recently documented in a report called “Quiet Crisis: Age Wave Maxes Out Affordable Housing, King County 2008-2025.” It was commissioned by the Aging and Disability Services, KCHA and other local public agencies, and was released in 2008.

The report projects that the number of poor seniors in King County will double to 53,793 by 2025. Even assuming the poverty rate doesn't increase, the region will need to provide nearly 16,000 additional units (or 900 units annually) of subsidized housing to maintain the current ratio of affordable housing units to poor seniors.