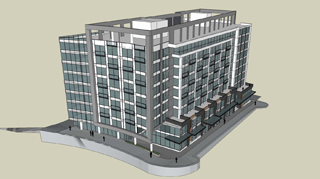 The nine-story complex is being designed by Weber Thompson for a site at 88 102nd Ave. N.E., across from Bellevue Downtown Park.

“We just love the Bellevue market. It's a great market to be in,” said Mike Ciserella, a co-owner of Cantera. “We really think our location on the park is special.”

He said the complex will be near Old Main Street and Bellevue Square as well as the offices of Microsoft and other companies. “The site just screams residential.”

The building will have mostly one-bedroom units, with some studios and two-bedrooms. The average unit size will be 727 square feet. There will be 10,600 square feet of retail space and about 200 below-grade parking stalls.

The project is targeting Generation X and Y technology professionals and empty nesters.

Cantera paid cash for the site in 2008, buying it from a man who owned it since the mid-1970s, Ciserella said.

The project is expected to cost about $50 million, including the land. The firm is in negotiations for construction financing, he said.

The contractor is Exxel Pacific, the owner's representative is Mark Modawell with the Sutor Group, the structural and civil engineer is DCI Engineers, and the MEP is Robinson Engineering. Weber Thompson is also the interior and landscape designer.

Blaine Weber, senior principal with the architecture firm, said projects this size and smaller usually aren't built in concrete and steel, as this one will be, because it's difficult to do that and keep the apartments affordable. The team is keeping costs down by designing smaller units, stacking similar-sized apartments floor-to-floor, and limiting the kitchen and bathroom layouts “so it's a limited kit-of-parts.”

“I think it's a matter of getting everyone to the table early and thinking through every nut and bolt,” he said.

This is Cantera's first Pacific Northwest project, although it has developed office, multifamily and industrial projects in the Midwest, Rocky Mountains and Southeast United States, Ciserella said.

Ciserella co-owns Cantera and Pioneer Engineering & Environmental Services with his brother Doug Ciserella. The brothers are both engineers and started in real estate in the late 1980s by acquiring, remediating and redeveloping contaminated properties. They moved into more traditional development about 15 years ago.

Mike Ciserella said the firm is impressed with the rising apartment rents and falling vacancies locally, and hopes to develop other projects here.

The apartment building is the first new commercial project in downtown Bellevue to undergo design review this year.

The market saw extensive development prior to the recession, but slowed dramatically during it.

Money to finance commercial real estate projects has been scarce post-recession. However, Blaine Weber said “there's actually a fair amount of money coming into the market right now for well-situated apartment projects” from real estate investment trusts and institutional players, and even some local banks.