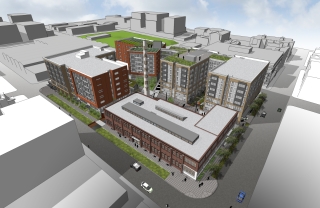 Rendering courtesy of Vulcan Inc. [enlarge]
Vulcan plans to start this full-block project in the first quarter of 2012. Two new buildings with 279 apartments are planned. The historic Supply Laundry Building in the foreground will be converted for commercial use.

Vulcan plans to break ground on a mixed-use apartment project with 279 units on a full block in Seattle's Cascade neighborhood in the first quarter of 2012.

In conjunction with that project, the city is moving ahead this fall with its long-planned Swale on Yale, a $10 million project that will treat 190 million gallons of stormwater that flow each year from Capitol Hill into Lake Union. The city expects to seek bids this month to build the first part of Swale on Yale.

The first phase includes installing pipes and other equipment, and is estimated to cost more the $1.3 million. KPFF is doing the civil engineering, and KPG is the landscape architect.

Runberg Architecture Group is designing the project. The interior designer is named two 9 design. The Berger Partnership is the landscape architect and Rafn is the contractor. Other team members are Coughlin Porter Lundeen for structural engineering, and KPFF for civil engineering.

Construction of the first phases of the swale project should start in the fourth quarter of this year and take six months, said Jason Sharpley, senior civil engineer for Seattle Public Utilities.

Vulcan's Lori Mason Curran declined to give a cost for the apartment project or say if Vulcan has an equity partner or construction financing.

The project is the latest boost to the area's residential inventory. Twelve years ago, there were only about 570 housing units in South Lake Union, which includes the Cascade neighborhood. A study by Seattle University economist Paul Sommers estimates that by 2020, 10,000 new units will be built in the area where Amazon.com, life science and other companies are moving.

There are more than 20,000 jobs in the neighborhood, with more expected. Mason Curran said the rate of job growth will depend on the strength of the economy and the speed with which planned projects, such as the expansion of Fred Hutchinson Cancer Research Center and the next phases of the University of Washington complex, are done.

About three-quarters of the apartments in the Vulcan project will be studios and one-bedrooms, with the rest two-bedrooms, plus an assortment of three-bedroom, townhouse, loft and live-work units.

The laundry is about 36,000 square feet, including the basement. Vulcan nominated it for landmark status in 2005. Parts of the facade and the smokestack are designated as a city landmark.

The building was in continuous operation as a commercial laundry from about 1906 to 2000, when Vulcan purchased it. The building has been vacant since then. Mason Curran said the plan is to market the laundry building for spec office, restaurant or retail use.

“The smokestack will require some internal bracing,” she said. “As for the building itself, we will augment the existing heavy timber beams with additional beams as well as some steel bracing on the interior on each faÃ§ade for additional seismic support.”

Five buildings on the block will be demolished, Mason Curran said. Most of them are vacant or have been leased as temporary storage or studio space.

Vulcan owns 55 acres in the area. Based on current zoning, by 2013 half of Vulcan's 10 million square feet in development capacity will be built.

The city is looking at changing zoning in the neighborhood.

Swale on Yale will include four biofiltration swales to slow stormwater flow by diverting it into swales, allowing sediments and pollutants to settle before the water goes into Lake Union. Two swales will be done in conjunction with Vulcan's apartment/laundry complex, and will be built when Vulcan is wrapping up that work, Sharpley said. “That will save us substantial money and reduce the impacts on the neighborhood.”

He said Vulcan is contributing $1.17 million to the overall cost of Swale on Yale.