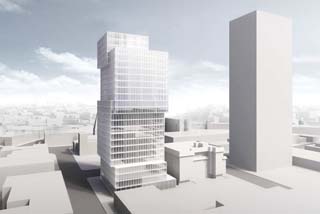 Images courtesy of Seattle DPD [enlarge]
This shows the preferred massing for a 240-foot tower at 1321 Seneca St.

Images showing Alecta's two high-rise projects on First Hill have been posted on the Seattle Department of Planning and Development's website.

The above image shows the preferred massing for the 240-foot tower at 1321 Seneca St. The image on the right is for the proposed tower at 504 Terry Ave., due east of Harborview Medical Center.

Weber Thompson designed both structures. An Alecta spokesperson said the developer has not selected a contractor, and did not know when construction might start.

Early design review for both towers is set for 6:30 p.m. Wednesday in Seattle University's Casey Building at 901 12th Ave.

The Seneca Street project is expected to have 220 apartments, with a mix of studios and one- and two-bedrooms.

In the design review packet Weber Thompson notes the site — now a surface parking lot — is next to low- and mid-rise buildings. The architecture firm said the massing “breaks the scale of the tower down into stacked elements... subtly changing overall scale into smaller pieces, while decidedly still being a tall tower.” 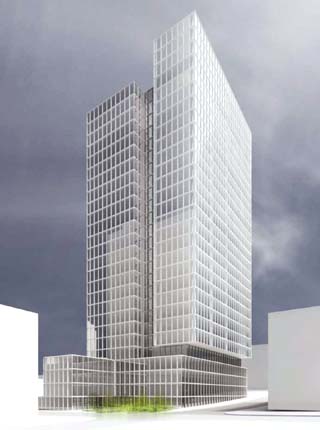 [enlarge]
This tower at 504 Terry Ave. will be east of Harborview Medical Center.

The packet is at http://tiny.cc/x6aedw.

The 26-story project on Terry will have about 350 studios and one- and two-bedroom apartments. The tower's height and smaller floor plates will relate well with the nearby medical campus, according to Weber Thompson. The design review packet is at http://tiny.cc/ysbedw.