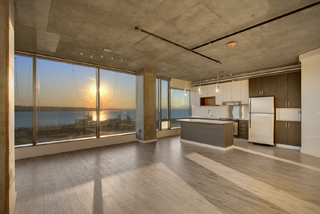 Apartments in The Post at Marion Street and Western Avenue in downtown Seattle have opened to residents.

The 16-story building has 208 units, with a mix of studios and one and two bedrooms, on top of several levels of above-grade parking.

Five retail spaces total 9,400 square feet. Two spaces are on Western, two are on Post Avenue, and one is on the second level along the pedestrian bridge to the ferry terminal.

Goodman Real Estate was the developer and Turner Construction was the general contractor. Weber Thompson designed the project.

The industrial-style apartments have concrete ceilings, exposed ductwork and wood floors. Units range from 430 to 1,290 square feet, and rent for $1,400 to $3,900 a month. Parking costs extra.

There is a rooftop terrace and lounge with a kitchen, theater, game room, library, and rooms for fitness and yoga.

Seventy-one units have been leased so far.

Interest in the retail has been good, according to a Goodman representative. The company is negotiating several deals, though none of the retail has yet been formally leased. The asking rate is $20 to $32 per square foot, plus taxes, insurance and maintenance.

Jason Miller and Damian Sevilla of Colliers are the leasing agents.