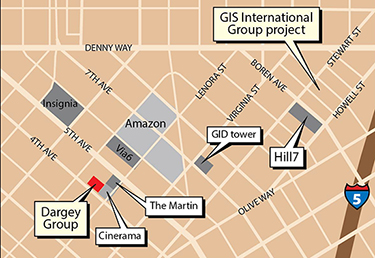 Dargey is president of Path America, a development company that finances projects through the EB-5 program, which allows people to obtain permanent visas and a path to citizenship if they invest in a qualifying real estate project.

Dargey said he is planning a mixed-use project on the site but would not release any further details.

HAL bought the property in May 2008 for $5 million from Jonathan M. Schweyen. HAL then filed an application to build a 38-story residential tower on the site.

The site at 2116 Fourth Ave. is next door to Seattle Cinerama and adjacent to The Martin, a 24-story, 188-unit apartment building that Vulcan Real Estate just finished.

The site is also a block away from Amazon.com's future 3.3 million-square-foot headquarters. Excavation is underway on the first of three blocks.

Dargey's first project using the EB-5 program is the Pagoda Village on Grand Avenue and Wall Street in Everett. The $63 million project is under construction and will have 220 apartments above a year-round farmers market. There will also be a 110-unit Hampton Inn by Hilton.

Dargey's first development project was in 2006, when he bought the Everett Public Market at Grand Avenue and California Street for $2.5 million. He did a renovation and created spaces for smaller tenants to avoid the risk of having a single large tenant.

Two years later he bought a nearly century-old building at 3006 Colby Ave. in Everett for $2.4 million. It was the former home of Henry Cogswell College. Dargey renovated it and leased it to Chicago Title Insurance Co.

His first ground-up project was completed in 2011: Potala Village Everett at 1315 Pacific Ave. The 108-unit mixed-use complex has 15,000 square feet of retail.

Dargey is also planning a lakefront residential project in Kirkland that is in a zoning dispute with the city.