Next up for the Denny Triangle: two 40-story apartment towers 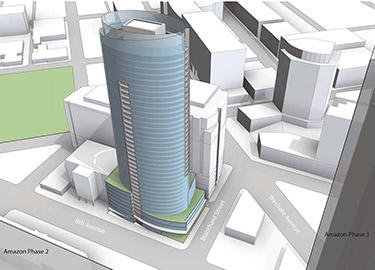 Transformation of the Denny Triangle continues as two 40-story apartment towers one block away from each other — and one block from Amazon.com's new campus — come up for design review.

This would be the second apartment tower in the neighborhood for GID Development of Boston. GID is proposing 430 units and 6,400 square feet of retail at 2101 Ninth Ave. The developer is already is building a 41-story apartment tower across the street at 2030 Eighth Ave.

Clise sold three blocks in the neighborhood to Amazon in 2012 for $207 million, and just sold Amazon another block last month for $52 million.

(Editor’s note: The story has been changed to correct the time of the Clise project meeting.)

Weber Thompson is designing the GID project and Graphite Design Group is the architect for Clise's project.

The GID site on Ninth and Lenora is at the corner of two streets designated as green streets by the city of Seattle. The city plans to put a park right next door to GID's site. 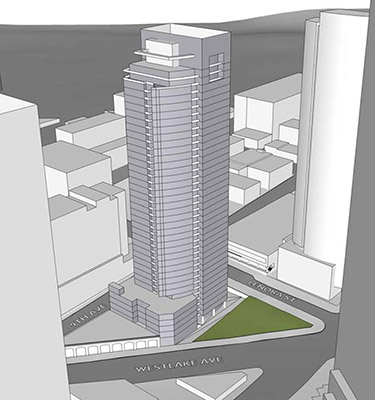 GID is under contract to purchase land for this project from Cornish College of the Arts, which acquired the site for $4.6 million in 2003.

Project documents for the Clise project at Eighth and Blanchard call the site an “urban gateway between the South Lake Union and Denny Triangle” neighborhoods now linked by Amazon.

The Denny Triangle is experiencing a boom similar to the one Amazon brought to South Lake Union over the last five years.

Since Amazon.com proposed a new 3.3 million-square-foot office campus in the Denny Triangle, proposals have poured in for office and apartment projects.

Apartment projects like Pine Street Group's Via6 and Vulcan Real Estate's The Martin opened last year and are filling fast. Other developers have bought land along Third and Fourth avenues with plans to build apartments there.