Legacy is building 279 apartments between Fremont and Wallingford 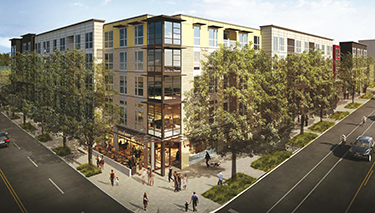 Image courtesy of Rutledge Maul Architects [enlarge]
Legacy chose the Stone Way site because it is a short commute to job centers, yet has a neighborhood feel.

Construction fences went up last week at 3801 Stone Way N., a site between Fremont and Wallingford where Legacy Partners Residential will build 279 apartments.

Because of the sloping site, part of the 340,300-square-foot building will be four stories and part will be five stories. The unit mix is studios, one- and two-bedrooms, and live-work and townhouse units ranging from 360 to 1,288 square feet. Residents can use a fitness room, courtyard and rooftop deck with greenhouse, dog run, fire pit and barbecue area.

Underground parking for 263 cars will be provided on 1.5 levels, and five commercial spaces totaling 7,500 square feet are at street level. The building will have a concrete base with wood-framing above.

General contractor BNBuilders is waiting for a master-use permit from the city to begin demolishing nine of the 15 buildings on the 8.1-acre site. BNBuilders hopes to get the permit in March and finish the project in summer 2015.

Kerry Nicholson, Legacy senior managing director, said rents will range from $1,200 for an open one-bedroom unit to $2,750 for a townhouse. He said the overall budget is more than $80 million.

Last November, the DJC reported that Legacy Partners paid $12.3 million for five parcels that make up the site. The project takes up more than half of the block bounded by Woodland Park Avenue North, Stone Way North, Bridge Way North, and North 38th and 39th streets.

Nicholson said they chose the Stone Way site because it is a short commute to job centers in South Lake Union and the central business district, yet it has more of a neighborhood feel than South Lake Union. He said it also is close to Green Lake, Ballard, the Burke-Gilman Trail and the University of Washington.

Nicholson said popular restaurants such as Joule and The Whale Wins, both within walking distance, demonstrate that the area has been found.

Jim Charpentier of BNBuilders said Amazon's development in South Lake Union is not only creating demand for apartments in that area, but also in Fremont and Wallingford. He said it's becoming a challenge for general contractors to get labor and good material prices because so many apartments are being built in the city.

Legacy's website shows it operates four other apartment projects in Seattle: Youngstown Flats in West Seattle, The Gilbert on Upper Queen Anne, Legacy at Pratt Park in the Atlantic neighborhood and Slate Apartments in Interbay.

Nicholson said the firm plans to start construction late this spring on the 209-unit Hadley Apartments on Mercer Island, and in October it will start a 225-unit project in Burien. Legacy also has a 178-unit project underway in Redmond, recently started a 186-unit project in Portland and sold the 309-unit Arcadia Luxury Townhomes in Federal Way.

Nicholson said the Stone Way project will get a name within a week or two.