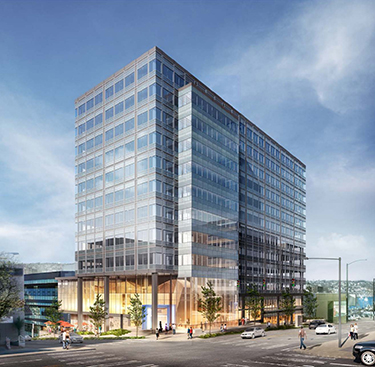 The building is called Urban Union. The developer is Schnitzer West.

A Seattle design-review board will hold a recommendation meeting at 6:30 p.m. March 26 at Queen Anne Community Center, 1901 First Ave. W.

The project would redevelop the site of Walsh Construction Co.'s Seattle offices. Four residential buildings will also be demolished.

The new building would be 278,000 square feet, including 6,100 square feet of retail. Parking for 392 vehicles is planned on five levels below grade.

The design would also create landscaped plazas in front of the building along Fairview and Republican Street, where the building would be deeply set back.

The plazas would have landscaping, lighting and seating. Building entries would be recessed or covered with a canopy.

Urban Union would sit across an alley from Amazon.com's Fiona building. According to design documents, the project would “expand the network of open space and pedestrian movement from the Amazon campus west along Republican Street, crossing over Fairview Avenue to the new projects across the street,” such as BioMed Realty Trust's 500 Fairview Ave. N. research building.

The developer has said it's looking to begin construction on both projects this year.