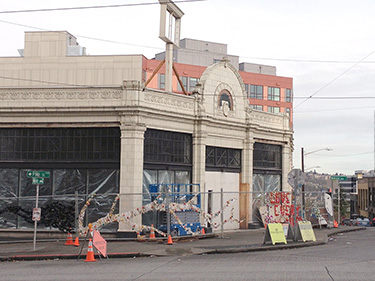 [enlarge]
This 94-year-old building near Melrose Market is being renovated, with a design by Graham Baba Architects.

Starbucks is looking to join the ranks of Seattle coffee shops that roast beans on the premises.

The coffee giant has filed plans to install two coffee roasters at 1124 Pike St., just across the street from Melrose Market and McMenamins' Six Arms pub on Capitol Hill. The proposal also includes a cafe and retail coffee store.

Graham Baba Architects is the designer.

A spokeswoman for Starbucks declined to discuss the company's plans.

A 2,500-square-foot space on the east side of the building would be sublet to a restaurant, identified in a filing as Tom Douglas' Serious Pie pizzeria.

A representative at Tom Douglas' corporate office declined to confirm whether Serious Pie will take the space and the building owner, Eric Weiss of the Weiss Co., referred all questions to Starbucks.

The project involves renovating a 15,600-square-foot, 94-year-old building that was last home to Utrecht Art Supplies, and an adjacent two-story, 16,200-square-foot structure that held a Volvo showroom.

No major exterior changes are planned, but new restrooms and mechanical, electrical and life-safety systems will be added.

The former Volvo space would be used to provide 20 parking stalls.

In addition to the usual construction-related permits, the project must also receive an approval from the Puget Sound Clean Air Agency. According to the agency, roasting coffee beans generate gases and toxic air pollutants.

The roasters would operate seven days a week, with beans delivered daily from the Starbucks plant in Kent.

The permit application filed with the agency says measures will be taken to control emissions from the roasters, such as using cyclones and thermal afterburners.

A public hearing on the air-quality issues was held last week.

Starbucks is seeking a notice of approval from the agency by the end of April, and expects to begin operations in August.

The city has already issued permits for construction.