Tens of thousands of apartments are set to open in Seattle over the next few years, so developers are searching for ways to stand out from the crowd.

It could be location, finishes, floorplans or — in the case of Holland Partner Group's latest project — a theme.

True North is an eight-story, 286-unit building at 801 Dexter Ave. N. that Holland has designed, built and marketed to urbanites who like the outdoors.

The theme seems to be working: True North opens tomorrow and is 58 percent leased.

The project team looked at everything — from pricey amenities to tiny details — for ways to reflect the outdoor theme. Holland Development Associate Kate Suski said the team tried to find “the True North answer” whenever an issue or opportunity came up.

Photos by Nat Levy [enlarge]
True North on Dexter Avenue opens tomorrow and the 286 units are already 58 percent leased.
[enlarge]
A climbing wall in the gym reinforces the outdoor theme.
[enlarge]
There are five outdoor terraces, including this one with seating, grills and a pizza oven.

The outdoor theme was the brainchild of Glen Scheiber, Holland's senior development director.

“There are a lot of apartment buildings coming on line now (so) you can start to have the same experience over and over again,” Suski said, “and this is a way to speak to the residents of Seattle in a different way.”

The gym has a 14-foot climbing wall that will be rearranged four times a year to keep it fresh for avid climbers.

A room on the ground floor called Base Camp has space for fixing skis and bikes, and lockers big enough to stow gear like snowboards and kayaks.

The lobby has a vent-less fireplace and a gathering space called the Map Room. One wall is painted with a topographic map, and there are shelves full of hiking and travel guides.

Holland tapped a Seattle gear rental company called Back 40 Outfitters to provide packages for residents who want to do things like camp or snowshoe. Back 40 will also offer presentations in True North once a month about different outdoor activities.

Holland is connected with Forterra's Green Cities program and will plant a tree when an apartment is leased. The trees go into a greenbelt restoration project on the southwest side of Queen Anne, and True North residents can also get involved in work parties and planting events.

“The natural environment was the inspiration for True North, and we wanted it to be reflected in every aspect from design to lease-up, bettering our urban footprint,” Scheiber said. “We hope that others follow our lead.”

Invesco Real Estate is Holland's partner on the project.

About half of the residents so far fit the outdoorsy demographic, said Jessica Dorsey, a property manager at Holland. Many are tech workers.

Dorsey said leasing began Feb. 1, but Holland officials weren't offering tours of the building until about two weeks ago.

“We had a significant number of people who leased without even stepping foot in the building,” Dorsey said.

But True North residents won't be off camping or biking all the time. The main amenity space is called the Summit, and it has a game room and a full kitchen.

There are five outdoor decks and terraces throughout the building, and some are furnished with couches, chairs and hammocks made of marine-grade materials, Dorsey said, to protect them from the elements. There also are multiple barbecue grills outside and a pizza oven.

Rents start at about $1,500 a month for “urban one-bedroom” units. These are like studios but have dividing walls for the bedroom space. Some of the units have larger kitchens than usually found in small apartments.

The eighth floor of True North is all two-bedroom penthouses that rent for $3,200 to $4,150 a month. The penthouses and live-work units have a higher level of finishes.

The team spent a lot of time looking for just the right barn-like doors to put on some of the penthouses, Suski said, another “True North answer” to set the units apart from the competition.

Seattle remains one of the top cities for biotech and life sciences.

According to a report from Jones Lang LaSalle, 875 biotech and life sciences companies employ 24,585 people throughout the region.

The center of all this activity in Seattle is Lake Union. There is nearly 3.2 million square feet of life sciences space in the neighborhood, and only 2 percent of that is vacant. Despite the tight space, Jones Lang LaSalle reports only one life sciences project under construction: Vulcan Real Estate's Allen Institute for Brain Science.

The lack of space has pushed rents as high as $55 a square foot in some parts of South Lake Union.

“With limited supply to satisfy the demand, tenants may look to traditional office space for life sciences conversion,” according to the report.

Capitol Hill is another popular area for biotech because it is near major hospitals like Harborview, Virginia Mason and Swedish.

Right now, JLL says, there is no space over 50,000 square feet available in South Lake Union or on Capitol Hill. This is pushing some companies out to the Eastside. Bothell has been the primary beneficiary of this trend: There's 1.9 million square feet of life sciences space in Bothell, and 17.3 percent of it is vacant. 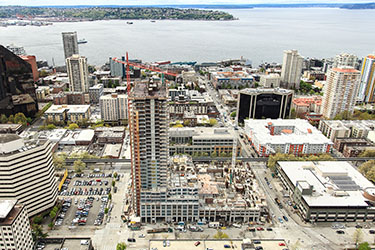 Photo courtesy of Tim Rice [enlarge]
The first of two 41-story condo towers in Bosa Development’s Insignia is expected to top out in July.

Bosa Development said it has sold 125 condos in the first phase of its twin 41-story complex called Insignia. The complex will have 707 condos when it is completed in spring 2016.

Bosa Director of Marketing and Sales Bemi Jauhal said the company is only marketing the first tower right now.

Crews are pouring the 35th floor of the first tower, and it is expected to top out in July, Jauhal said. That puts Bosa on track to finish the first building next spring.

Perkins & Co. Architecture and Urban Design is designing Insignia and The Mark Co. is the broker. Mitchell Freedland is doing the interiors.