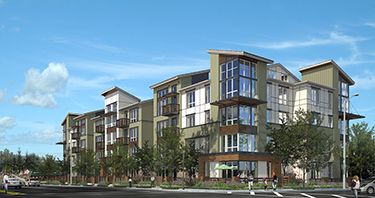 Last week MainStreet Property Group broke ground in Kenmore on Spencer 68, a 138-unit apartment project that is part of the city's plan to make downtown denser and more walkable.

Spencer 68 is the first of two projects MainStreet can build on a 4.75-parcel at 68th Avenue Northeast and Northeast 181st Street. The second phase will also be housing, with about 90 units. MainStreet Chief Financial Officer Jackie Hizzey said the company wants to see how well Spencer 68 leases after it's done a year from now before planning the second phase.

Dahlin Group Architecture Planning of Pleasanton, California, is the architect. MainStreet's construction division, GenCap Construction Corp., is the general contractor, and Insite Property Solutions will be the property manager.

Spencer 68 will have an outdoor pool with cabanas; a barbecue area with a gas fire pit; an entertainment and game room; fireside lounge; bike maintenance area; and a gym.

Hizzey said the city's vision for developing downtown Kenmore played a big role in MainStreet's decision to do this project.

Between 1999 and 2005 Kenmore acquired 9.6 acres of downtown land for a project called Kenmore Village. That acreage includes the land where MainStreet's projects are being built and an adjacent 3.3-acre parcel the city had planned to sell to Benaroya Cos. and Real Property Investors, but Kenmore City Manager Rob Karlinsey said that deal fell through late last year.

Karlinsey said the city is talking with a potential buyer for that parcel, and wants to see a mix of retail and office space there.

The maximum height in the area is 65 feet for housing and 35 feet for commercial, but Karlinsey said the city could go taller if the right proposal came along.

The city is also looking at building a park or “town green” to provide a public gathering place.

“This is our bull's eye in downtown,” Karlinsey said, “so we really want to make it special and make it pop.”

City officials have been focused on downtown for a few years, adding a new city hall, library and fire station. They fought to keep a downtown post office and realigned Northeast 181st Street, a key downtown arterial.

One piece of Kenmore Village is already open: Kenmore Camera moved into a new space at 6708 N.E. 181st St. in February. The new store is three times the size of its previous location.

A few blocks south of Kenmore Village, along the shores of Lake Washington, is a much bigger project that could bring a lot of new jobs and housing to Kenmore.

It's called Lakepointe, and has been around in some form since 1989. The 45-acre site is owned by Pioneer Towing Co.

Representatives of Pioneer Towing did not return a phone call requesting comment.

A permit that has been extended several times calls for 206,000 square feet of office space; 440,000 square feet of retail and commercial space, including a movie theater and a hotel; 1,200 residential units; a 27-boat marina; and 4,464 parking spaces.

Today the site is being used as staging for the state Route 520 bridge project. That is expected to continue through 2015 or 2016, Karlinsey said.

Karlinsey said the city will be “very motivated” to get the project done once the land is no longer needed for the bridge.

But the Lakepointe site has challenges. The land did not exist 100 years ago and much of it is fill, so site work will needed to stabilize future construction and that will increase the cost.

But Karlinsey said the city will work with a developer to make sure the project gets done.

“This is the one project that could do more than anything else to transform Kenmore,” he said.