For decades, the Central Agency Building at 952 E. Seneca St. on Capitol Hill was kind of invisible, buried under sheets of dull metal siding.

It was built in 1917 and for many years held thousands of file boxes, including confidential FBI documents.

But now Jerry Everard, who developed The Crocodile, Neumos and other hot music spots in Seattle, and Alex Rosenast, owner of the Garage, have transformed the old building. The first step was tearing off the siding that shrouded the structure for more than a generation.

“That metal siding was making people forget the building existed, and that was by design,” said Everard, who is also a partner at the Seattle law firm of Groff Murphy.

The Central Agency Building's new look is wide open. The interior spaces are big and feel bigger thanks to high ceilings, exposed beams and tall windows that bring in lots of natural light. 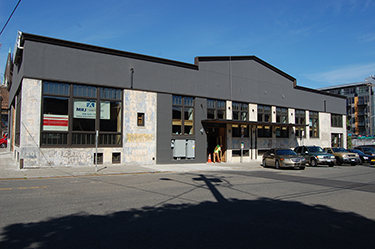 [enlarge]
Crews ripped off the exterior siding and gutted the interior of the Central Agency Building, revealing a cool 1917 structure that will soon be home to several new eateries, including Lark restaurant.

Core and shell work was recently finished on the building, which is behind The Garage, at the corner of 10th Avenue and East Seneca Street.

Chef John Sundstrom said he will move his restaurant, Lark, into the Central Agency Building from 926 12th Ave., and launch a new concept called Bitter and Raw and a to-go sandwich counter in the building. There will also be a basement space for private events.

Sundstrom said he will use Lark's old spot on 12th Avenue near Seattle University for temporary events like pop-up restaurant space, until at least early next year.

Sundstrom expects to open in the Central Agency Building this fall.

Rosenast said he has letters of intent for two other spaces in the building, but he would not name the tenants. Rosenast said one small space is still available.

Everard and Rosenast aren't the only ones in the middle of a big restoration project in that area. At the corner of Broadway and Union Street, next door to the Garage, two former Microsoft employees, Troy Hakala and Gay Gilmore, are developing a brewery called Optimism Brewing.

The brewery will be in a single-story 1920 building at 1158 Broadway that was built as a showroom for Great Western Motors Co. 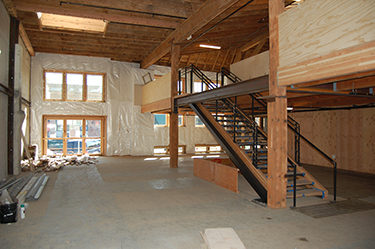 [enlarge]
Spaces have high ceilings and lots of natural light.

Optimism Brewing should serve its first beer next year, Gilmore said. First the renovation has to get done, and then Hakala and Gilmore have to brew the beer.

Olson Kundig Architects is designing their new space and Metis Construction is the general contractor.

Hakala has been a home brewer for more than 25 years, and has always wanted to start a brewery.

Gilmore said they looked at the Central Agency Building when it came on the market, but decided it would be too difficult to run a brewery on multiple levels.

But Gilmore said the Central Agency Building's makeover will complement their brewery.

“Alex and Jerry have done an amazing job rehabbing the building,” Gilmore said. “They have attracted some great neighbors for us, which is always good, but having excellent food options right next door is a win-win for us, as we will be serving beer only.”

As work on the Central Agency Building wraps up, Everard is starting his next project: a 2,400-square-foot restaurant at 300 E. Pike St. The building is another auto row-era space that now houses a McMenamins restaurant called Six Arms. The new restaurant will be in a space that used to be a parking garage

Eric Johnson will run the new restaurant, called Stateside, and it will serve food with Vietnamese and French influences.

Construction started earlier this month on the space. Everard said Stateside should open this fall. Strata Architects is the building architect and Method Construction is the general contractor. Johnson is using Heliotrope Architects to design the restaurant space.

Everard has built a reputation for creating new neighborhood landmarks by re-using old buildings. This kind of project can actually cost more than demolishing a structure and starting over, but Everard and Rosenast say they like the character of older buildings.

When the sheet metal came off the Central Agency Building, crews found the remains of old signs and murals still on the concrete. That's the kind of thing you can't put into a new building.

“We think in the long run, preserving an older building as it becomes a rarer commodity will be a smarter investment,” Everard said.

The sales volume for the most expensive homes in U.S. cities is up 21.1 percent so far this year, after rising 35.7 percent in 2013, according to a report from Redfin, the online brokerage.

Sales of these houses, which are the top 1 percent in prices, make up most of the market activity today. When it comes to the other 99 percent of houses nationwide, sales are down 7.6 percent so far this year after a rise of 10.1 percent last year.

In Seattle, a house priced in the top 1 percent would start at $1.65 million. Sales of these homes here are up 67.7 percent so far this year, while other sales are down 4.2 percent.

To afford this kind of house, Redfin estimates a buyer would need an annual income of $282,000, more than four times the county's median income for an individual.

According to the report, 44 percent of 1 percent buyers nationwide pay with cash.