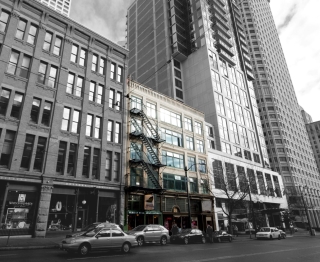 The firm said in a statement it plans to reposition the five-story, 33,000-square-foot building as creative office space and to “reprogram the retail space with a more appropriate use.”

Joe Ferguson, a Lake Union founder and principal, said the tenants are on month-to-month leases and will be asked to leave for a renovation that will start early next year. One of those tenants is Taboo Adult Video.

Lake Union plans to substantially renovate the 1893 building, which is between Hotel 1000 and the Holyoke Building on First Avenue, and across from the Alexis Hotel.

The work will include a full seismic retrofit, new mechanical, electrical and plumbing systems and elevator, and adding a sixth-level penthouse office.

Ferguson said his firm wants to celebrate the heritage of the building, and improve it with a rare glass-box penthouse that has views of the water.

Ferguson said the building, which should reopen next summer, has an advantage because it has inherent character not found in high-rise office buildings.

“Tenants today, regardless of your location, are asking for unique space in a building with a story to tell,” he said. “In a high-rise, what (owners are) challenged with is trying to make those 1970s, 1980s spaces with drop ceiling tiles somehow feel open and creative. ”

A restaurant owner has signed a letter of intent to lease 5,000 square feet of retail space in the 1012 First Avenue building, Ferguson said.

For the office space, he said Lake Union will target creative firms and mature tech companies that want 5,000 to 10,000 square feet. Asking rents will be $30 to $35 full service per square foot annually, and about $40 full service for the penthouse.

According to an offering memorandum on the building from CBRE, the building was originally owned by the German Savings and Loan Society and housed a business specializing in hardware, stoves and plumbing supplies.

In 1898, Standard Furniture Co., owned by Louis Schoenfeld, purchased the property after relocating the business there. In 1899, Standard added two more stories and the structure became known as the Schoenfeld building.

The memorandum notes that the building is a rare example of the Commercial Style or Chicago architecture from the late 19th century.

The building is home to an eclectic mix of small businesses. The building generates about $18,000 in rents each month, according to the memorandum.

Ferguson said the 1012 First Avenue building is in an interesting neighborhood that is attracting new tenants, including MulvannyG2 Architecture.

Ferguson said his firm also sees the value of having a building near the waterfront and along a street that has been suggested as a streetcar route.

Dino A. Christophilis with CBRE represented the owner in the building sale. Lake Union represented itself.