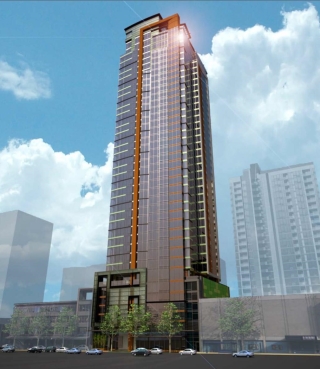 Renderings courtesy of Weber Thompson [enlarge]
The tower will have about 350 luxury apartments, 150 hotel rooms, restaurant space and 200 stalls of below-grade parking.

Construction is slated to begin late this year on the 41-story Potala Tower, an apartment and hotel project at 2116 Fourth Ave. in Seattle.

Everett-based Dargey Development, headed by Lobsang Dargey, is the developer, and a limited liability company managed by Dargey called Potala Tower Seattle is the owner.

Lobsang Dargey said he expects the tower will take 26 months to build.

Dargey, who is Tibetan, said the tower is named after Potala Palace in Tibet which was once the residence of the Dalai Lama. He said the name represents peace and harmony.

The tower will have over 350 luxury apartments, about 150 hotel rooms, 2,500 square feet of restaurant space and about 200 stalls of below-grade parking.

The site is on Fourth Avenue between Blanchard and Lenora streets, in an area thick with new condo and apartment towers. It is next to Seattle Cinerama and a block from Amazon.com's future 3.3 million-square-foot headquarters buildings. 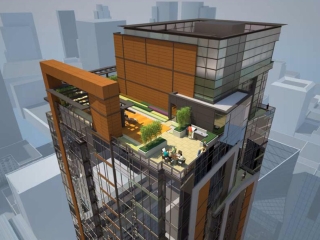 “You can't get any better than this location,” Dargey said. “This is our dream project. We are excited to bring a really good building to this part of town.”

He said the $190 million tower will have a deck on the top floor with seating and barbecues for residents. On the seventh floor will be a deck with an outdoor bar for guests of the hotel.

There will be separate fitness centers for residents and guests, and separate entrances for the hotel, apartments and restaurant.

Last year, Potala Tower Seattle LLC bought the 0.3-acre site for $11.5 million from an entity related to HAL Real Estate Investments, which had applied to build a residential tower on the property.

Dargey is president of Path America, a development company that finances projects through the EB-5 program, which allows people to obtain permanent green cards and a path to citizenship if they invest in qualifying real estate projects.

He said EB-5 money is financing Potala Tower, along with his own money.

EB-5 investors must generally invest in a new commercial enterprise and create or preserve at least 10 full-time jobs for qualifying U.S. workers within two years of the immigrant investor's admission to the United States as a “conditional permanent resident.”

Dargey said the 26 months of construction on Potala Tower and ongoing operation of the hotel will meet the EB-5 job requirements. He said the project will create about 2,900 jobs.

Jon Hallgrimson, an executive vice president and multifamily specialist with CBRE, said lots of apartment towers are slated to open in Seattle in the next few years. While it's difficult to predict future market conditions, he said recent projects “have done very, very well — far better than anybody thought when they started them. The market just continues to be strong.”

It takes longer to construct an apartment tower than a mid-rise building, Hallgrimson said, and that adds an extra year of risk that the economy will stay strong.

“It's really a bet on the economy,” he said. “That's what these guys are doing.”

Seattle is a top West Coast apartment market, Hallgrimson said, thanks to an educated workforce and job growth in cutting-edge industries. “Young people want to live downtown because its cool and happening,” he said.

Apartment developers are also encouraged by government's investment in light rail, the Highway 99 Viaduct replacement tunnel, and the planned expansion of the convention center, he said.

Dargey said his firm got a two-year jump on the market by buying the site with an approved master use permit. He is making only minor revisions to that permit.

Apartments in Potala Tower will be aimed at workers from Amazon.com and the Bill & Melinda Gates Foundation as well as people who like to live downtown and walk to work.

The hotel should attract leisure travelers and business travelers, including people related to Amazon.com, Dargey said.

Dargey said he thinks projects like his — along with Amazon.com's new space — will transform Belltown.

“It will be a really nice place to live,” he said, with work, restaurants and entertainment nearby. “You can walk to work. You can walk to Pike Place Market, the Space Needle — anywhere.”