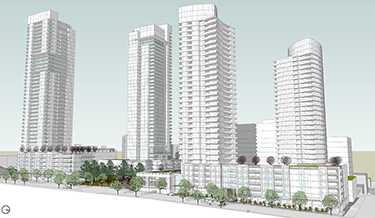 Images by Chris Dikeakos Architects [enlarge]
The complex would have almost 2,000 housing units.

The proposal calls for four apartment towers with a total of 1,950 units and 43,000 square feet of street-level retail. Underground parking for 1,950 vehicles is also planned.

Onni of Vancouver, B.C., purchased the property from The Seattle Times in 2013.

Changes include more varied tower heights, more retail, and preservation of Seattle Times Park, a small patch of greenery at the southwest corner of Fairview and John. Also, John Street, which bisects the development, would remain open to motorized traffic.

The changes follow the recommendations from a design-review board meeting in April.

Two towers on the south block would be 42 stories, the maximum allowed by zoning.

The north block towers are taller than previously proposed in return for preserving Seattle Times Park.

[enlarge]
The Seattle Times headquarters would be preserved.

The board also requested that the retail include a space large enough for a grocery store. Retail would be concentrated along either side of John Street, along the edge of the park and on the south block along Fairview.

Other elements include a rooftop deck on the Times headquarters, which will be preserved as a historic landmark. Mid-block pedestrian connections are also planned.

A proposal to change John Street into a park and pedestrian plaza will be dropped, but the street would become more pedestrian-oriented.

The project, if completed, would make Onni one of the biggest developers in South Lake Union.