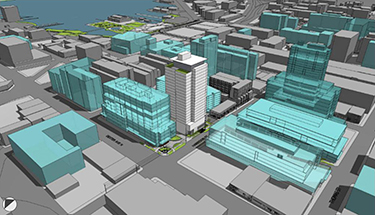 Rendering courtesy of Runberg Architecture Group [enlarge]
The apartment tower at 401 Eighth Ave. could be 24 stories. 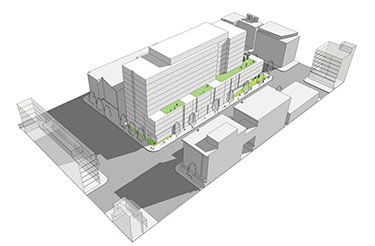 Rendering courtesy of NBBJ [enlarge]
The preferred design for the office project is called a “shifted tower.”

Design review meetings on both projects are set for Oct. 1 at Queen Anne Community Center, 1901 First Ave. W. The meeting on the apartment tower is at 6:30 p.m. Review of the office building starts at 8 p.m.

The DJC first reported on both projects in May.

The preferred design for the housing project shows a skinny tower on the south side that occupies about half the site and a 45-foot podium on the north side. There will be a solarium on top of the podium and a rooftop amenity space.

The preferred design for the office project is called a “shifted tower.” The tower will sit on a 65-foot podium, leaving space for a deck on the Westlake side. Design also shows open space at street level on the south side near Westlake and Republican.