Real Estate Buzz -- For sale: about half of Yesler Terrace

Seattle Housing Authority is selling three parcels of the land within Yesler Terrace to private developers to finance the replacement and expansion of low income housing in the neighborhood.

The land totals about 14 acres and is split into three pieces: one for office and retail development, one for housing, and one piece along Yesler near Broadway where Vulcan plans to build housing in structures up to 240 feet tall.

About half of the 30-acre Yesler Terrace site will be sold.

“It's fundamental to the kind of community we want to build to have the full mix (of incomes), and we also rely on sale of land to fund the building of the infrastructure, amenities and affordable housing,” said Stephanie Van Dyke, SHA's development director. “Other sources are not sufficient to fund all the affordable housing.” 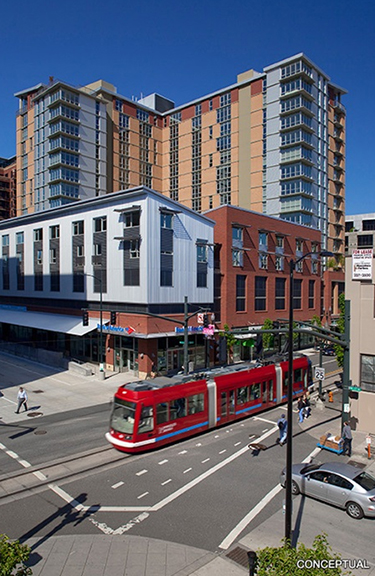 Image courtesy SHA and GGLO [enlarge]
Kidder Mathews is marketing about 4.4 acres of land along the north edge of Yesler Terrace where future office buildings like these could be built.

A study done two years ago suggested SHA will need to get about $145 million from land sales to fund all the housing, infrastructure and other projects it wants to do at Yesler Terrace, Van Dyke said, though the amount needed could change due to the cost of construction, infrastructure projects and design changes.

Van Dyke said SHA doesn't have a timeline for selling the land.

The first 15 replacement units are done with the renovation of Baldwin Apartments at 124 13th Ave. Units in the Baldwin are open and fully leased.

SHA is also in the middle of a $12 million infrastructure project that includes improvements to Yesler Way, a hillclimb, sewer work and grading the site of a future neighborhood park.

Next up for SHA is approximately 100 apartments at 221 10th Ave. S., and Van Dyke said construction will begin next year. SMR Architects is designing it, and Andersen Construction is the general contractor. That building is scheduled to open in early 2017. Once it is done, SHA will have replaced about 40 percent of the original 561 units.

Van Dyke said the final composition of the neighborhood will depend a lot on what private developers do.

Currently SHA is negotiating with Vulcan Real Estate for about three acres along Yesler Way near Broadway. Originally Vulcan was going to be the master development partner for Yesler Terrace, but during negotiations, SHA and Vulcan decided it would be best for SHA to be master developer. When negotiations are completed, Vulcan could buy the land and build market-rate and workforce apartments on three blocks. Those buildings could be up to 240 feet tall and would be set back from the street, according to design guidelines for Yesler Terrace.

Rosauer said there is interest from a variety of groups: local and national developers; tech companies from here and California; and health care companies.

“We are getting broad interest from all different avenues,” Rosauer said. “There is a number of ways it could go at this point.”

Rosauer said a call for offers could be coming soon.

Van Dyke said towers on this property could be as high as 160 feet in some places and 240 feet in others.

SHA wants to see a mix of mid- and high-rise buildings on this land to accommodate a mix of household incomes, which is the agency's goal for Yesler Terrace. SHA wants low income, affordable and market-rate units as well as office space to be intermingled with parks and other amenities throughout the neighborhood.

“We're trying to move from having what were isolated concentrations of poverty — which is what happened with past public housing projects — to neighborhoods where people have the opportunity to stay in the neighborhood as their income rises,” Van Dyke said. 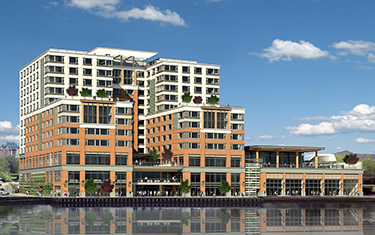 Seco Development just broke ground on a 12-story, 350-room hotel in Renton. It's not far from the Seattle Seahawks' practice facility, and the height is an homage to the 12th Man fanbase.

The $180 million hotel is set to open in 2017, said Michael Christ of Seco Development.

The hotel is part of the larger Southport complex, a 17.5-acre site on Lake Washington that used to be home to a steam plant.

Christ said the steady improvement of the economy and a new flow of capital into the Seattle market triggered the start of the hotel. Seco is working with Seattle Family Regional Center, a federally approved EB-5 center, on the project. The EB-5 program allows foreign investors to get green cards and a path to citizenship if they invest $500,000 or $1 million in a qualifying project.

“It's the perfect time in the economy where people want to get money out in the market, and they are willing to indulge the designers to do something better,” Christ said.

The next step for Southport is an office project. Christ said ZGF Architects is updating plans for three buildings totaling 778,000 square feet.

Shortly after buying the land in 1999, Seco was close to landing Amazon.com for a 750,000-square-foot lease, but the deal fell through. Since then, Christ said three major companies have taken hard looks at the space but still no bites.

Christ said he is confident the office market is trending upward, and that his site on the shores of Lake Washington and close to Interstate 405 is a great location. He would not say if he'll start construction without a tenant.

“I think it depends on the marketplace,” Christ said. Back when he bought the land, the market would have supported spec development. “It is unlikely now, but that could change really, really quickly.”