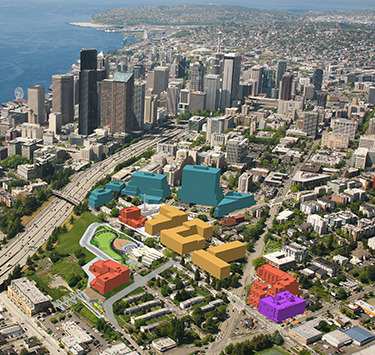 Image courtesy of GGLO [enlarge]
Vulcan Real Estate wants to buy the sites shown in gold. The blue sites are office and retail properties now being marketed by Kidder Mathews. Sites in red are being developed by SHA. The purple site is Spectrum Development Solutions’ Anthem on 12th.

The property totals 3.7 acres and is along East Yesler Way between Broadway and Boren Avenue.

Vulcan wants to build 650 market-rate and “workforce” apartments. Workforce units will be reserved for people making up to 80 percent of area median income.

Vulcan expects to spend about $200 million developing the three-block site.

Construction on the first block — at Yesler Way and Broadway — could begin in early 2016, with the units opening by the end of 2017.

The agreement is structured so the sale of each block will have a separate closing date, one a year between 2015 and 2017.

Lori Mason Curran, Vulcan's real estate investment strategy director, said the blocks will be developed one at a time. The second block is likely to start in early 2017, about a year after the first one. Development of the third block would start in 2018.

The buildings will likely be mid-rise, up to 70 feet tall. Zoning allows towers up to 240 feet, but Mason Curran said Vulcan opted for shorter buildings because they better fit the neighborhood scale and Vulcan's vision.

All three blocks will target LEED gold certification and have ground floor retail.

Vulcan will do infrastructure and street improvements nearby.

Vulcan and SHA have been negotiating this agreement for several months. Originally Vulcan was going to be the master development partner for Yesler Terrace, but later SHA and Vulcan decided it would be best for SHA to be master developer.

SHA is selling about 14 of the 30 acres in Yesler Terrace for private development. A study done two years ago suggested SHA will need to get about $145 million from land sales to fund housing, infrastructure and other projects at Yesler Terrace.

Towers on this property could be as high as 160 feet in some places and 240 feet in others.

SHA has finished the first 15 replacement units with the renovation of Baldwin Apartments at 124 13th Ave. Units in the Baldwin are open and fully leased.

This is one of three projects Spectrum is planning near Yesler Terrace.