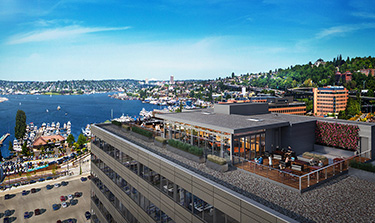 Schnitzer West is the developer and CollinsWoerman is the architect.

Demolition is expected to take about five weeks, followed by excavation.

The building will have two landscaped plazas, 6,100 square feet of street-level retail, and five levels of underground parking for 392 vehicles.

A glass cube entry will lead to a two-story space called The Union. The building will have a concierge, gym, and a conference and training center.

It's scheduled to open in the first quarter of 2016.

The developer is also demolishing a building at Fifth Avenue and Madison Street for Madison Centre, a 37-story, 754,000-square-foot office building.