With office buildings popping up all over South Lake Union, the development company is steering its marketing machine in a new direction.

Schnitzer West has tricked out an RV with wood floors, plush seats and video screens to make its pitch for Urban Union, a 12-story office building at 501 Fairview Ave. N.

The RV allows Schnitzer West to go straight to tenants, not just in Seattle but in other tech hubs like San Francisco, said Senior Investment Manager Jeff Harmer.

Tech tenants are known for liking new ideas and disrupting the old ways, so Schnitzer West wanted to show it has the same mindset. The RV combines traditional real estate pitches with 3D renderings and videos, as well as panorama shots of rooftop views made by attaching a camera to a balloon. And all this can be done while driving down Interstate 5. 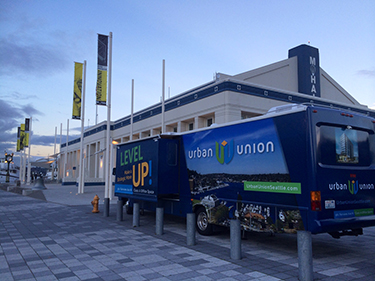 Photo courtesy of Schnitzer West [enlarge]
Schnitzer West is using an RV to market Urban Union. The rig is designed to show the innovation and flexibility that tech companies covet. 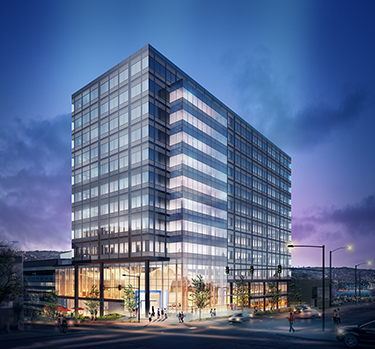 Multimedia in the marketing center is controlled through a tablet or smartphone app. Schntizer West can project images of lease terms, renderings, commute options and promotional videos onto multiple screens. There’s even a model of the building that interacts with a smartphone app: Open the app on your phone, point the camera at the model and see visualizations of any floor.

Schnitzer West wants the marketing RV to show the flexibility tech companies love, and extend that to the building.

Urban Union is designed to be super flexible. It won’t have any mechanical rooms; all the mechanical infrastructure will be in the ceiling. There is space where extra elevators and freight elevators can be added later.

The building is designed for multiple tenants, but also could accommodate just one.

“We want a tenant to be able to have a blank slate where they can come and build out whatever they need,” Harmer said.

Schnitzer West just put the finishing touches on the RV this week. The outside is blue, with a rendering of the project under an operable awning. The slogan for the building — “Level Up!” — is emblazoned on the side.

Senior Investment Director Pam Hirsch said the RV also is an “ode to the food trucks” that tech employees in South Lake Union flock to everyday.

Schnitzer West worked with Eastman Strategies of Seattle and Hamilton Creative to come up with the concept and design for the RV.

Beyond Traditional of Seattle has done several marketing campaigns using vehicles, and outfitted the RV; Built By Moby did the Urban Union app; Image Mill was responsible for interior graphics; Neoscape Inc. did renderings and an animated film about the building; and Magic Hour Films worked on a promotional video.

Demolition began this week on the site, and is expected to take about five weeks. The 285,000-square-foot building will open in the first quarter of 2016.

As it has done at other projects, Schnitzer West will focus a lot of attention on the entrance and lobby, creating a two-story “great room” called The Union. The blue-lit entry will be called the Blue Cube and it is simulated in the RV. Harmer said tenants have told the developer they spend a lot of time and energy on the entry to their spaces, so Schnitzer West wanted to do the same.

Harmer said Schnitzer West officials, architects and other team members routinely tour buildings around the world, and spend a lot of time looking at lobbies. As employers pack in more people, the lobby can offers an escape from the bustle of the office.

In addition to the usual things you might expect in an office lobby these days — seating, conference center and a gym — Urban Union will also offer a personal touch. The front desk will have a concierge to deliver dry cleaning or make reservations for dinner, and the gym will offer personal trainers.

Schnitzer West hired BAMO, a hotel designer from San Francisco, to help with the lobby and interiors.

“It’s more like a boutique, five-star hotel experience rather than just a comfy place to sit,” Hirsch said.

Another key piece is the rooftop conference area called the Overlook, with an enclosed area that can be split into smaller spaces as well as outdoor seating.

“Tenants can have access, regardless of what floor they are on, to prime real estate up on top (for) events and that third workspace that is unique,” Harmer said.

Schnitzer West learns from its experience on past projects. For example, the gym will be equipped with an isolated slab under the floor to mute noise in case someone drops a large weight.

“What did we do ... and what can we do better?” Hirsch said of the company’s approach to new buildings. “That’s what we are constantly doing; we do have a little (research and development) group.”

Pavilion Construction, a Portland-based general contractor that last year opened an office in Seattle, recently hired Sonja Saporito as chief financial officer. Saporito comes from Holland Partner Group’s construction and development divisions where she was director of finance and accounting.

She played a big role in helping Holland grow from doing a single construction project in one state to managing 25 projects in four states between 2010 and 2014.

Saporito told the Buzz that she decided to go to Pavilion because she preferred to work at a smaller company.

“Holland was a lot smaller when I started there; it just became quite big,” she said. “I was just looking to get back to my roots where I have been in the past which is those mid-sized companies.”

Saporito will help Pavilion solidify its financial policies and procedures. Brian Gerritz, president at Pavilion, said Saporito will bring experience working in several states, and a strong leadership voice, something Pavilion likes in its department heads.

Pavilion just finished two student housing projects in the University District. It is also doing a modular townhouse in Renton, the Mercer Island High School addition and is about halfway done with an apartment project in Lakewood.