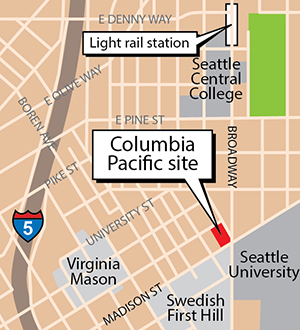 An entity related to Columbia Pacific Advisors is planning a 16-story apartment tower at 1001 Broadway that will have a 40,000-square-foot Whole Foods on the ground floor and approximately 300 apartments above.

Early permit documents filed with the city show the building could have 337 parking spaces. A site plan shows the building would take up the eastern half of the block.

Tiscareno Associates is the architect.

Property records show Columbia Pacific paid $21.1 million for the half block in February 2008. There is a three-story office building on the site.

A spokesperson said Columbia Pacific likes the site because of its proximity to Seattle University, Swedish Hospital Medical Center and the First Hill streetcar line.

This will be Whole Foods' ninth store in the Puget Sound region. The release said the store will open in early 2018.

Representatives of Columbia Pacific did not provide a timeline for the project other than to say that an early design guidance meeting with the city could be in December or January.

Columbia Pacific is a Seattle-based investment firm that was founded 25 years ago, and has done a few local projects recently. It just finished a senior housing complex in Kirkland, and later this year will complete a 161-unit apartment project at Fourth and Denny.