Westlake Steps an ‘anchor' for SLU 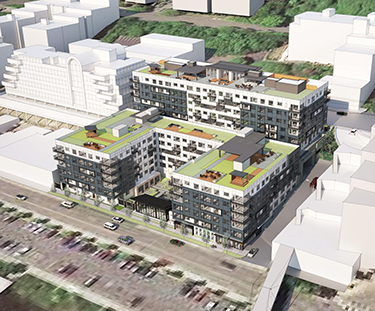 The complex is on Westlake Avenue North, across from Lake Union. Thousands of people who drive south into Seattle every day over the Ship Canal Bridge will see downtown skyscrapers — but they'll also see Westlake Steps.

The complex will have several structures.

The project team wants an eye-catching design because of the site's prominent location in South Lake Union.

Design documents filed by Holland and Weber Thompson said, “These buildings shouldn't blend into the surrounding context of neutral, beige neighbors. This marks the beginning of South Lake Union, a neighborhood undergoing rapid change. These buildings are visual anchors that reflect this transition.”

A design review board held a recommendation meeting yesterday on the apartment buildings.

The buildings will be south of Galer Street between Westlake and Dexter. Both will be 65 feet tall but because of the sloping site, the western building will appear taller. Both will have rooftop decks and views of Lake Union.

The eastern building is designed in a U shape with a courtyard overlooking the lake. A small glass pavilion in the courtyard will be a “visual beacon” for the project, according to the documents.

The design aims to break up the mass of the buildings.

Last December Holland paid $79.5 million for 14 parcels on 5.5 acres between Westlake and Dexter. Holland is already constructing a six-story, 150,000-square-foot office building at 1101 Westlake Ave. N. The land purchase included a master-use permit for that building.

Holland also plans to renovate an office building at 1300 Dexter Ave. N., and is planning two six-story apartment buildings with a total of 387 units at 1207 Westlake Ave. N.

The DJC recently reported Holland is eyeing three more projects that could add another 740 apartments:

• At two neighboring sites — 401 Pontius and 400 Minor — Holland is considering two seven-story structures with a total of 240 apartments and 228 parking spaces.