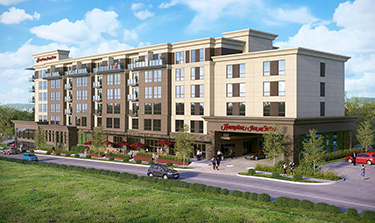 A six-story Hampton Inn & Suites Hotel is being planned at 9550 First Ave. N.E. in Northgate.

Gramor Development Washington of Seattle is the owner and developer.

(Editor’s note: An earlier version of this story incorrectly said the developer is based in Tualatin, Oregon, and is working on a redevelopment of the Vancouver waterfront. Gramor Development Washington is not involved in the Vancouver project.)

The hotel will have 168 rooms, with 136 parking spaces on site and another 15 shared spaces off site.

There will be an landscaped “urban garden” along First Avenue. On the ground floor will be the breakfast area, meeting space, gym and pool.

Jensen | Fey Architects of Redmond is listed as the architect.

A design review board will make a recommendation at a meeting tonight at 6:30 p.m. in University Heights Community Center, 5031 University Way N.E.

Project documents say the site is well-suited for a hotel because it is near both the freeway and several office buildings. The hotel will also be near a future light rail station that Sound Transit is building east of First Avenue Northeast and Northeast 103rd Street. The station is set to open in 2021.

In December 2012, an entity related to Gramor paid $2.9 million for the site, where a Marie Callender's restaurant once operated.